One–day conference with subject: «Volunteerism as an expression of cultural pluralism and social solidarity, based on Christian tradition» 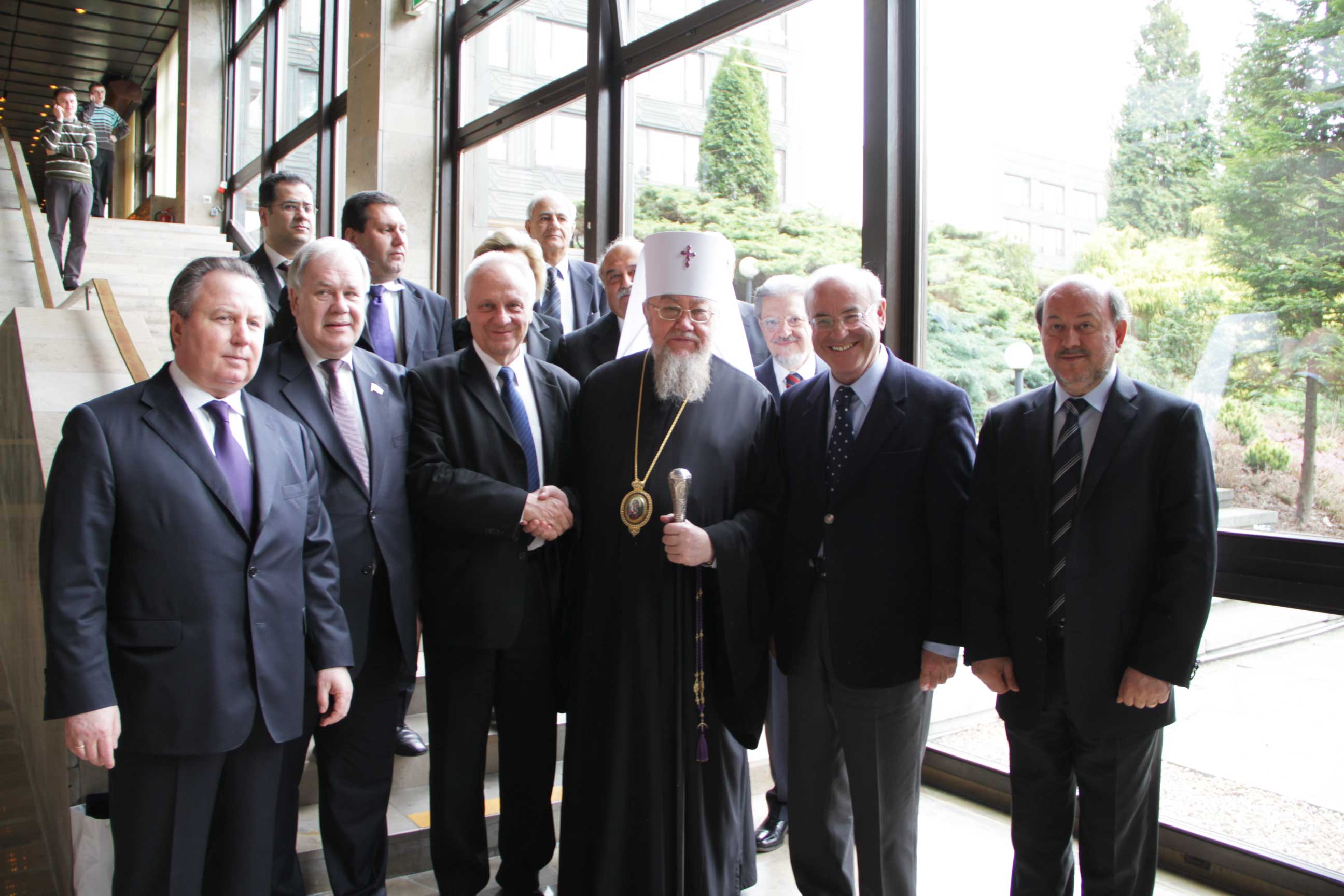 The one-day conference with subject: «Volunteerism as an expression of cultural pluralism and social solidarity, based on Christian tradition» was realized in Warsaw on Monday, 11 April 2011.
The one-day conference was hosted by the Sejm of Poland and the President of the I.A.O. General Assembly Mr. Sergei Popov chaired the conference.
The Vice-Marshal of the Sejm Mr. Stefan Niesiołowski welcomed the participants and declared the opening of the works of the conference.
His Beatitude Sawa, Archbishop of Warsaw and Metropolitan of All Poland participated at the conference and cordially addressed the participants.
The contribution of Mr. Eugeniusz Czykwin, Member of the Sejm of Poland, Chairman of the I.A.O. Committee on Culture was decisive to the over success of the conference and the whole visit. 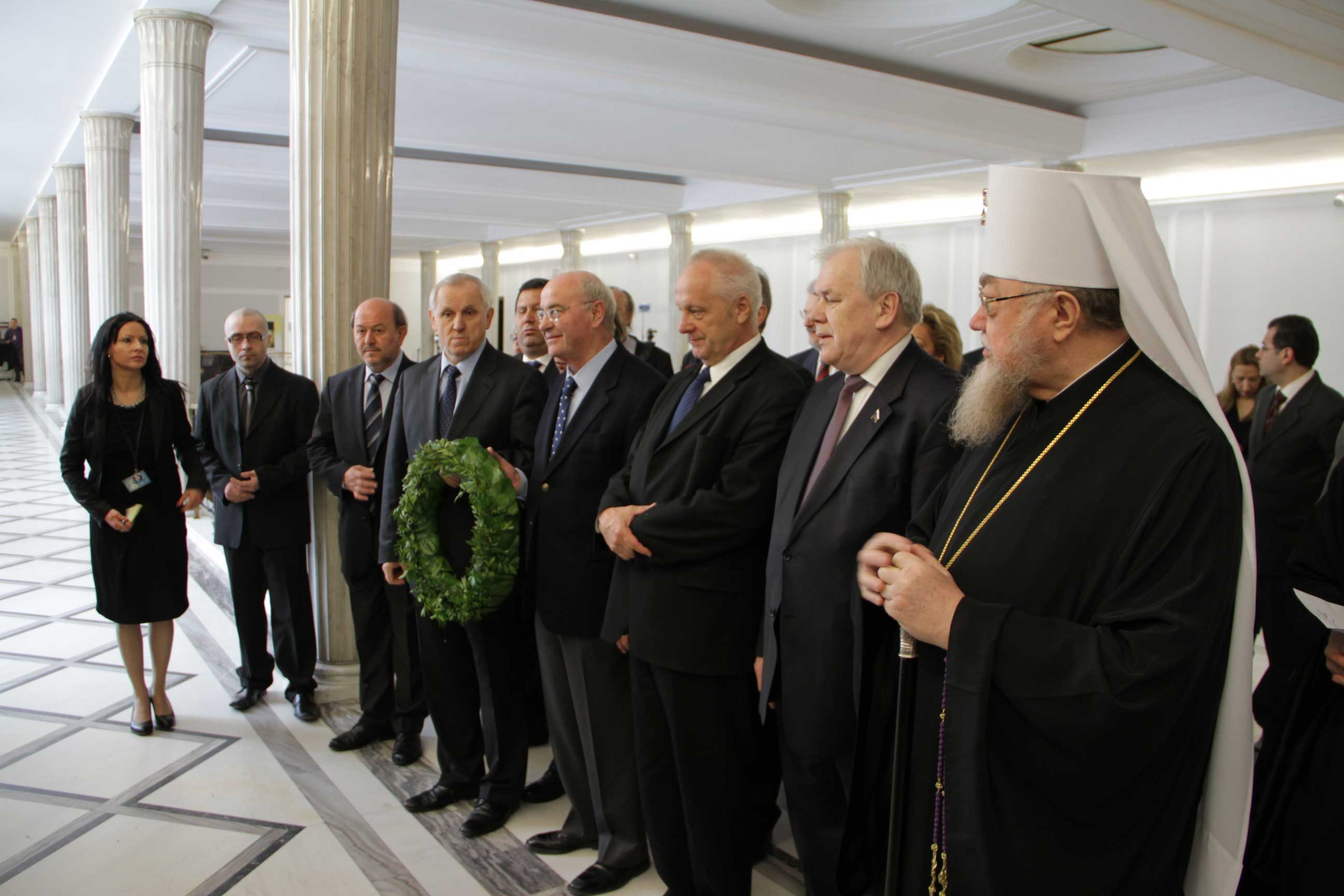 Interventions on the main subject were presented, inter-alia, by Mr. Anastasios Nerantzis, I.A.O. Alternate Secretary General, Mr. Michail Pantoulas, Head of the Greek Parliamentary delegation, as well as Ms. Olga Kołtuniak, representative of the of the organization “Caritas” of the Catholic Church in Poland.

Moreover, reports were presented by:
– Prof. Olga Astafieva, Vice Chair of the Cultural Research dept. of the Russian Academy of Public Administration, Doctor of Philosophical Sciences, with subject: “The cultural policy in conditions of cultural pluralism: discourses and strategies”.
– Prof. Valery Alexeev, Advisor to the I.A.O. International Secretariat with subject: “Post-multiculturalism: New realities and challenges”.
– fr. Genrich Paprotskiy, representative of the Orthodox Church of Poland, presented a report on the subject of the conference.
– Dr. Christos N. Tsironis, Lecturer on Contemporary Social Theory, Sector of Ethics and Sociology, Dep. of Theology, Aristotle University of Thessaloniki with subject: “The new social welfare state and the social-diaconical initiatives of Christian Churches in the EU. Research findings and critical queries of a European Program”.
– Dr. Kostas Mygdalis, Advisor to the I.A.O. International Secretariat with subject: “Volunteerism and social welfare in times of the economic crisis. Contradictory or complementary concepts?”.

On Wednesday, 13 April 2011, an I.A.O. delegation, visited the town Bialystok, where the largest number of Orthodox people reside and had the opportunity to meet with the former Members of Parliament and I.A.O. members, Mr. Aleksander Czuz and Mr. Sergius Plewa. During their visit to Bialystok, the I.A.O. members visited the Holy Transfiguration Monastery, the Monastery of Lavra (in Souprasl), as well as the Metropolis of Bialystok where they had a meeting with the Metropolitan Iakovos of Bialystok.
The I.A.O. International Secretariat adopted the following text:

Conclusions – suggestions
It is a common finding that today’s world is going through a phase of general transformation. Changes are taking place in daily life and culture, in perception and function of the structures, institutions and values constructed within society. The economic crisis, which brings back to the forefront and intensifies social problems of the past, at the same time giving rise to new ones, is accompanied by a certain discrediting of institutions, as well as by insecurity, social cohesion deficit, disruption of social networks. Society’s conquests of last century are retracted in the name of overcoming the economic crisis. Societies do not have any visible point of reference. Every day we experience people’s confusion and their anguished quest for social identity and presence. In these conditions, it is a primary duty for everyone to keep offering an authentic and superior model of life focused on justice and solidarity.
To this effect, the below conclusions and suggestions are being reported of the one-day conference held by the Interparliamentary Assembly on Orthodoxy (I.A.O.) in collaboration with the Polish Parliament in Warsaw, (April 11, 2011), on the topic: «Volunteerism as an expression of cultural pluralism and social solidarity, based on Christian tradition». The final text was elaborated on by the International Secretariat of I.A.O. during its meeting the following day:
Solidarity underlines and substantializes man’s inherent sociability. This means that for human beings, who are not only spiritual, but also social and political creatures by nature, social life is an essential and inalienable dimension. The rapid proliferation of means of communication and the great progress of information technology allow relations to be established between distant and unfamiliar people. It is indeed concluded that there has never been such awareness on the content of the term of interdependence on all different levels among individuals and peoples. The close links between solidarity and equality, solidarity and world peace, solidarity and the ecumenical destination of goods, place solidarity on the level of the fundamental social virtue.

The church offers its solid diaconia, aiming to support people on a personal level, strengthen interpersonal bonds and assistance networks, but certainly also to further shape social proposals to ensure all people’s life and dignity.
Church’s offer also consists in its peace-making presence, as much as possible, in the field of social confrontations, with the aim to protect the existing social structures and networks in favor of the weak. In fact, Church provides moral support and teaching, offers material assistance and acts in synergy with social and state institutions so as to ensure sustainability and continuity of social interventions for the benefit of “lesser brothers”, in order to protect them against different kinds of mendicity and marginalization.
The I.A.O. invites the Parliamentarians participating in its activities, the Parliaments and the Governments of the entire world:
• to contribute actively in developing networks for the protection of the weak and in general those who are deprived of their rights.
• to understand in depth their duty before society, and display principles and values related to truth, freedom, justice, love and finally man’s dignity.
• to actively support collaborations and social networks that contribute in promoting volunteerism, so that social warranties and conquests of workers and vulnerable groups in society are protected in these times of crisis and even further.

The I.A.O. addresses to the Church, inviting it to take creative action in displaying civil society, which will be based on respect for rights, equality and freedom without restrictions. To this effect, the suggestion is made for cooperation between the church and the welfare state structures and other social bodies, and for synergy of their actions, based on the principle of subsidiarity, so that it is interdisciplinary, on multiple levels, timely and multivalent, with emphasis on active solidarity for every human being in need.