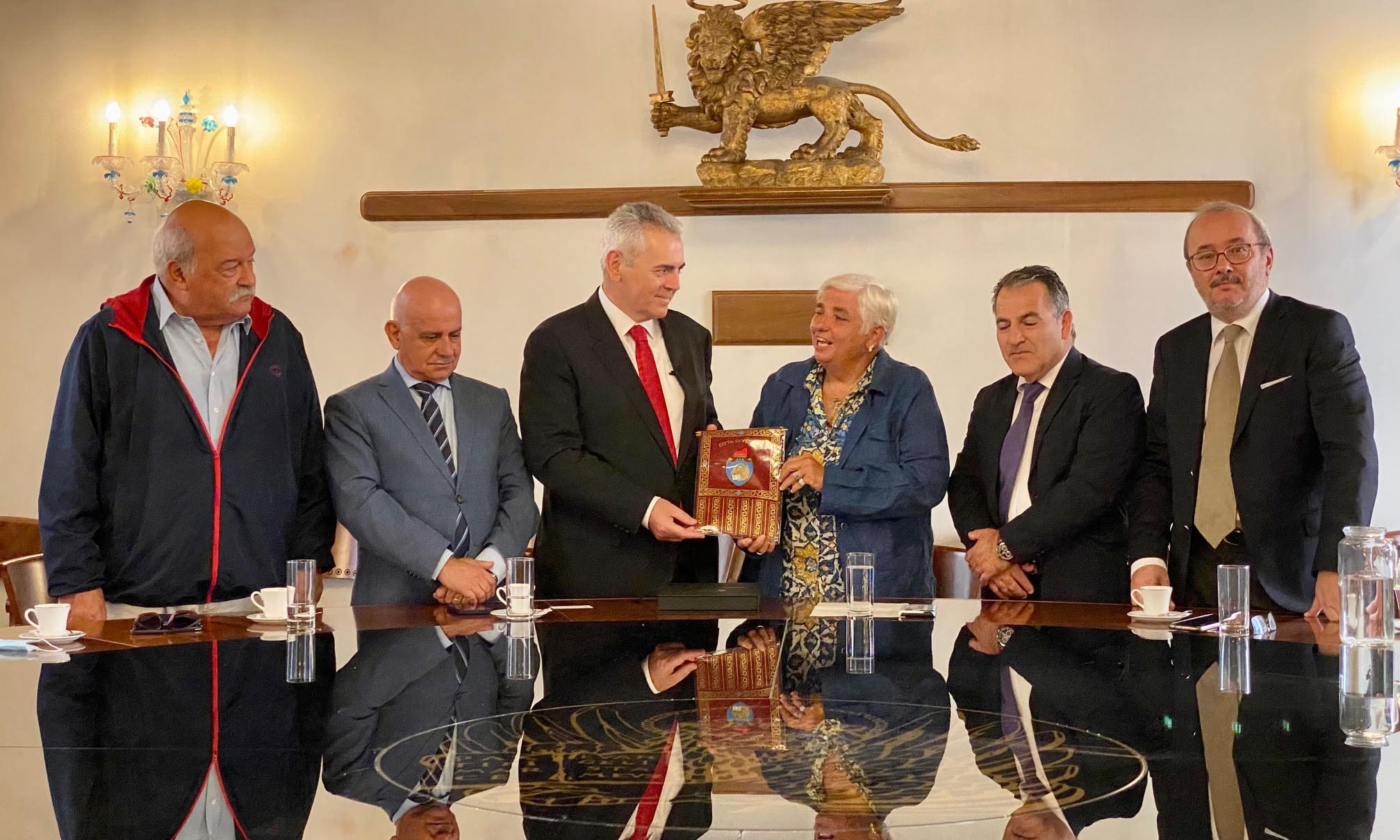 A delegation of the Interparliamentary Assembly on Orthodoxy (I.A.O.) visited Venice for the presentation of the Volume, entitled “Hagia Sophia: The Churches of the Wisdom of God around the world”, in the framework of the 24th International Congress of Byzantine Studies, organized by the Hellenic Institute of Byzantine and Post-Byzantine Studies in Venice. The I.A.O. delegation headed by the Secretary General Dr. Maximos Charakopoulos, comprised by the members of the Cypriot delegation Mr. Panikos Leonidou and Mr. Ilias Myrianthous, and the I.A.O. Advisors Dr. Kostas Mygdalis and Dr. Alexander Fomenko. The presentation of the Volume took place in the courtyard of the Church of Saint George in Venice. The I.A.O. Secretary General Dr. Maximos Charakopoulos, referring to the conversion of Hagia Sophia in Istanbul into a mosque, pointed out that “the imposition of changing the function of the Church to something else is an act promoting the law of power against the power of law and historical truth. Therefore, this is a cultural regression! And this is exacerbated by the images of an imam wielding a sword inside the Church and other similar sad phenomena”. Moreover, he added, “as Turkish scientists and Turkish media have pointed out – and certainly this is to their credit – the 6th century building of incomparable architectural perfection constantly suffers from serious damage caused by the mass attendance of citizens, without use of any protection rules. That’s why we call on the international institutions, governments, universities and institutes, and of course Turkey’s own institutions and Turkish intellectuals and scientists to jointly react, before it’s too late for this monument of world heritage”. Professor of the Aristotelian University of Thessaloniki (AUTH) Mr. Christos Arambatzis, Professor of the National and Kapodistrian University of Athens (NKPA) Ms. Ioanna Stoufi-Poulimenou, who is also scientific responsible of the volume, and Dr. Aikaterini Korre, presented the volume to a large multinational audience, while a greeting was addressed by the Professor of University of Padua Mr. Nicolo Zorzi. The event was attended, among others, by H.E. Metropolitan Polykarpos of Italy, the members of the I.A.O. delegation and Byzantine scholars from various countries. The members of the delegation visited the Hellenic Institute of Byzantine and Post-Byzantine Studies in Venice and had a meeting with the President Professor Mr. Vasilios Koukousas, who guided the I.A.O. delegation around the premises of the Institute. The I.A.O. Secretary General thanked the President of the Institute “for the close collaboration that enabled us to be able to present in Venice the Volume on the Churches of Hagia Sophia around the world. And as I wrote in the Institute’s book, we are truly grateful to the Hellenic Institute of Byzantine and Post-Byzantine Studies in Venice because it is still today a beacon of the Byzantine East here in the Catholic West.” The I.A.O. delegation was also warmly welcomed at the Town Hall of Venice by the Deputy Mayor on Culture Ms. Paola Mar, who was briefed on the purpose of the visit and was offered the Volume on the Churches of Hagia Sophia. Ms. Paola Mar stressed that “Venice is a sister city with various cities of the world and we are interested in promoting peace, which is what the I.A.O. is doing as well”. The Deputy Mayor offered the head of the I.A.O. delegation the symbol of the city. During its stay in Venice, the I.A.O. delegation was guided to the Basilica of Saint Mark, built based on the Church of the Holy Apostles in Istanbul.

Venice, 23 – 25 August 2022. Presentation of the Volume “Hagia Sophia: The Churches of the Wisdom of God around the World”

Karlsruhe, Germany, 2 September 2022. Presentation of the Volume “Hagia Sophia. The Churches of the Wisdom of God around the world”

Rome, 28 August 2022. Offering the Volume «Hagia Sophia: The Churches of the Wisdom of God around the World» to His All Holiness Pope Francis