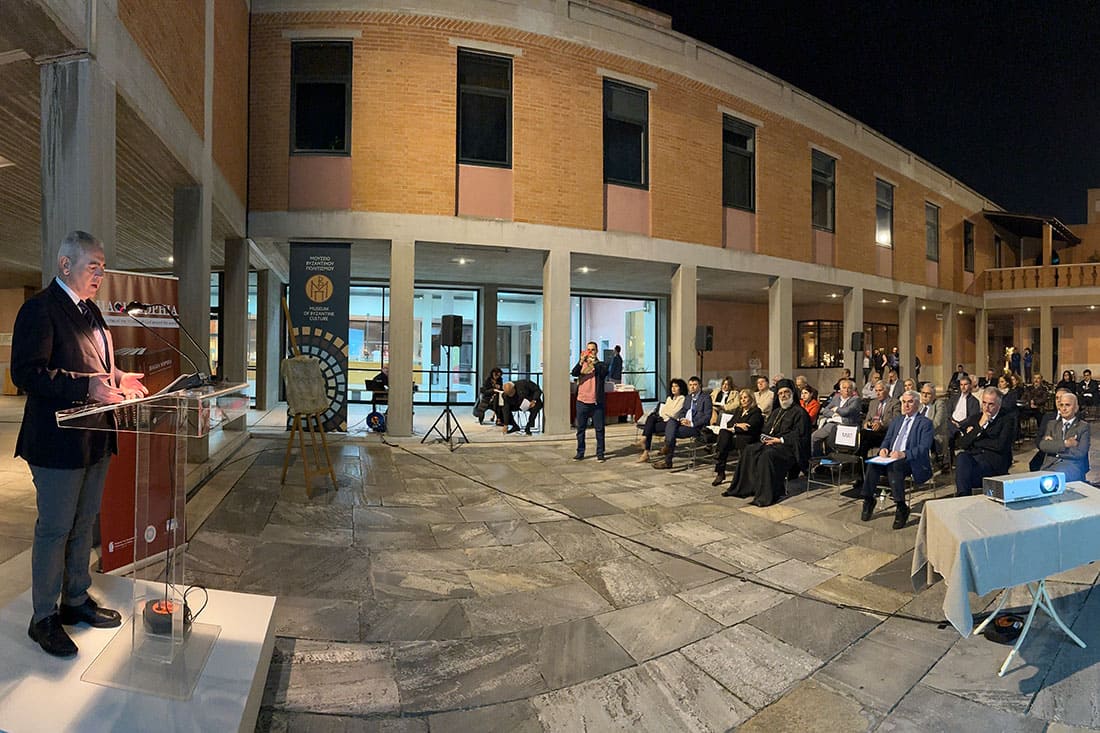 The presentation of the Volume “Hagia Sophia: The Churches of the Wisdom of God around the World” was held on Friday, October 21, 2022 in the courtyard of the Museum of Byzantine Culture in Thessaloniki, with the participation of representatives of the political, academic and religious community of the region. The Members of the I.A.O. Ms. Ana Lashkoska, Member of the Parliament of North Macedonia and Mr. Ioan Vulpescu, Member of the Parliament of Romania participated to the event. Addresses were presented by the Deputy Minister of Macedonia – Thrace, Mr. Stavros Kalafatis, the Vice-President of the Hellenic Parliament, Mr. Athanasios Bouras, on behalf of the President, Mr. Konstantinos Tassoulas, and the Rector of the Aristotle University of Thessaloniki, Prof. Nikolaos Papaioannou, commending the work carried out by the I.A.O. the recent years. In his speech, the I.A.O. Secretary General Dr. Maximos Charakopoulos highlighted, inter alia, the following: “If it were in only one city that we should present the volume about the Hagia Sophia, and since this cannot be done in Istanbul (Constantinople), the former Reigning City (Vassilevoussa), then it would naturally be Thessaloniki, the eternal co-reigning City (Simvassilevoussa). (…) It is no coincidence that the institution, which I have the honor to lead, and which includes representatives from 25 parliaments, was founded close by, in Ormylia, Chalkidiki. When shortly after the fall of the socialist regimes some insightful politicians, such as our fellow citizen Stelios Papathemelis, saw the need to coordinate the Orthodox peoples. They saw the demand of the times, to articulate our own discourse, with our own values, in a rapidly changing world. Thus, that’s what we tried to do then and that’s what we’re trying to do today, in an, unfortunately, adverse environment. Because, after the turmoil between the Orthodox Churches, the war in Ukraine also arose, due to the Russian invasion. We, however, as representatives of parliaments continue our work, always in the service of peace, reconciliation and unity. And, as we have done since the first moment of the outbreak of war, and from this step we call for a ceasefire and to come to the negotiating table for an agreement based on international law”. The Director of the Museum of Byzantine Culture, Dr. Agathoniki Tsilipakou, spoke about the Volume. Moreover, the archaeologist of the Ephorate of Antiquities of Thessaloniki, Dr. Stella Vassiliadou, spoke on “The Hagia Sophia Church of Thessaloniki”, and Dr. Theodosis Kyriakides, from the Chair of Pontic Studies, School of History, Aristotelian University of Thessaloniki, presented the theme “Hagia Sophia Church of Trebizond: Political and social implications”. At the end of the event, which was coordinated by the I.A.O. Advisor Dr. Kostas Mygdalis, a painting depicting the Church of Hagia Sophia in Thessaloniki was presented to the I.A.O. Secretariat by the painting artist Ms Tassa Bitsanis-Petrou. The participants also had the opportunity to walk-through the photography exhibition, with photographic material, resulted from the International Photography Competition, organized by the I.A.O. last year with the theme: “Hagia Sophia: The Churches of the Wisdom of God around the world”. The exhibition will remain at the Museum of Byzantine Culture until the end of October.