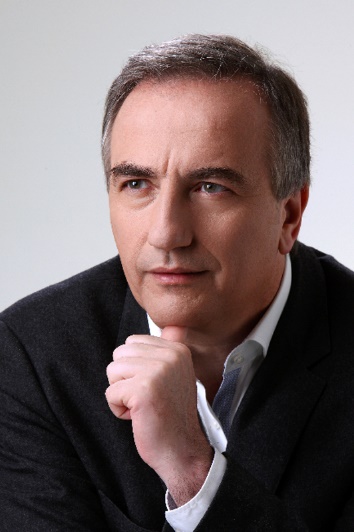 Place and Date οf Birth: Born in Thessaloniki in 1965.
Marital Status: Married to Evdokia Moisiadou and has a daughter and a son.
Profession: Lawyer.


Studies: Graduated in Law from the Aristotle University of Thessaloniki, receiving an MA in International Studies from the same institution in 1991.
In 1994, he took a second MA from the University of Maryland, USA, in Sports Management.
Foreign Languages: English.

• Sworn in and undertook his duties as MP on 09-01-2003. Reelected in the general election of 2004, 2007, 2009, 2012, 2015 and 2019. In July 2019, on the proposal of Primeminister and President of Nea Dimokratia, Mr. Kyriakos Mitsotakis was elected Secretary General of the ND Parliamentary Group.
• He stood as Alternate Minister of Environment and Climate Change, Minister of Macedonia-Thrace and Deputy Minister of Development. At the time being he is Deputy Head of the Sector of European Affairs of the Nea Dimokratia Party. Secretary General Parliamentary Group of NEW DEMOKRATIA
• On 17 September 2020, during the elections of the organs of the 27th annual General Assembly of the Interparliamentary Assembly on Orthodoxy (I.A.O.) he was appointed Treasurer, Member of the Financial Committee and Rapporteur of the Committee on International Policy of the Interparliamentary Assembly on Orthodoxy (I.A.O.)

Following in the family tradition, he played a highly active role on the Thessaloniki sports scene.
Began practicing as a lawyer in 1990, while simultaneously working as a consultant in electronic and printed media communication. Former PAOK Press and Public Relations spokesman.
Taught sports management at a number of private colleges.
Elected onto Thessaloniki City Council in 1998, and sworn in as deputy mayor responsible for the environment and the Green Belt in 1999.
Special councilor responsible for Communication and Public/International Relations on Thessaloniki City Council (2000-December 2002).
Active on a number of Thessaloniki City Council committees, and vice-president of the Municipal Enterprise for Sports (DEAD).
Currently serving as special councilor responsible for Twinning and the Balkan Network, and as vice-chairman of the 5th Municipal Centre providing the elderly with care in the community.
Presented papers at conferences and seminars.
Competed internationally as a handball player, playing for the Thessaloniki YMCA and Tritonas teams for many years.