5th Meeting of the Inter-Orthodox Network of initiatives for the study of religions and destructive cults with subject: “Guruism in destructive cults and elsewhere: Personal – Spiritual – Social problems and their treatment.” 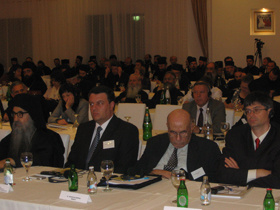 Mr. Aleksander Čotrić, Member of the National Assembly of the Republic of Serbia, Member of the I.A.O. International Secretariat, participated in the 5th meeting of the Inter-Orthodox Network of initiatives for the study of religions and destructive, held in Ribarsko Ostrvo, 24 – 27 September 2012. Mr. Čotrić addressed the meeting on behalf of the President of the General Assembly Mr. Sergei Popov, and the Secretary General Mr. Anastasios Nerantzis. He briefed the audience on the twenty-year I.A.O. activity, the increasing number of parliamentarians participating in the organization, as well as the close cooperation with the Orthodox Churches of its member-states. Moreover, he underlined that the conclusions of the meeting will be an incentive for the I.A.O. members-colleagues to express their views on the subject of the meeting.