Main subject: “The contribution of the Orthodox culture to the construction of the New Europe”
The General Assembly was held at the Hellenic Institute of Byzantine and Post Byzantine Studies in Venice.

A representative of ‘SYNDESMOS’ (The World Fellowship of Youth) participated in the Assembly with the status of observer.

In addition, the Metropolitan Gennadios of Italy, Exarch of South Europe, the Mayor of Venice prof. Mr. Massimo Cacciari and the President of the Hellenic Community of Venice Mr. Demetrios Zafiropoulos were invited and participated in the works of the Assembly. Greeting messages by His All Holiness The Ecumenical Patriarch Bartholomew as well as by the Patriarch of Moscow and all of Russia, Alexios II, the President of the Russian State Duma Mr. Boris Grizlov, and the Secretary General of the World Council of Churches Rev. dr. Samuel Kobia were addressed during the inaugural ceremony. 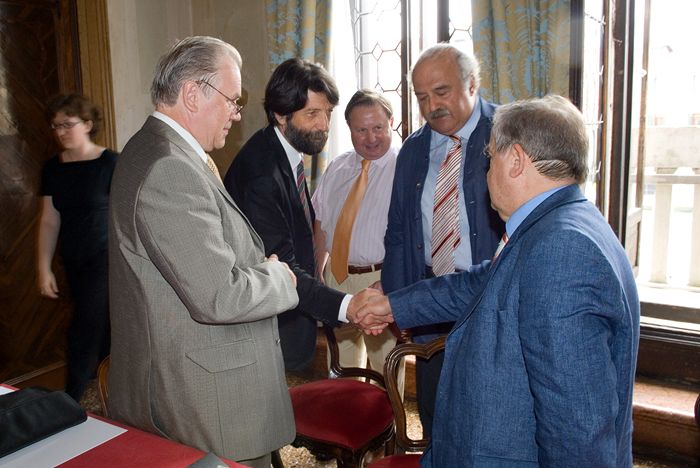 The ceremony was concluded with the opening of the photographic exhibition on the subject: “The Christian heritage of Kosovo and Metohi – a shared responsibility”, presented at the premises of the Hellenic Institute.

The following reports were presented on the central subject:

« The Byzantine heritage in Russia and the Slavic world: Continuity and innovation » by the Dean of the History department of the Moscow State University of Lomonosov, prof. Sergei P. Karpov.

«The contribution of Byzantium in the development of history and the cultural identity of Europe» by the Professor of History-Archaeology Department at the Aristotelian University of Thessalonica, prof. Mrs. Alkmini Stavridou-Zafraka.
1. 1. During the works, the General Assembly agreed to include the newly constituted I.A.O Committee on Mass Media to the I.A.O International Secretariat.
2. 2. The works of the General Assembly were concluded with the elections of the members of the I.A.O organs for a two year tenure.

THE MEMBERS OF THE I.A.O

Minutes of the 13th General Assembly