Opening of exhibition «Athos: The Holy Mount» in State Duma of the Russian Federation.

On April 4, 2016, in the premises of the State Duma of the Russian Federation, the exhibition of the Interparliamentary Assembly on Orthodoxy (I.A.O.) was opened on the subject: «Athos: The Holy Mount» dedicated to the year of Russia in Greece and year of Greece in Russia, but also in the context of celebrations for the millennial presence of Russian monks on Mount Athos (1016-2016). 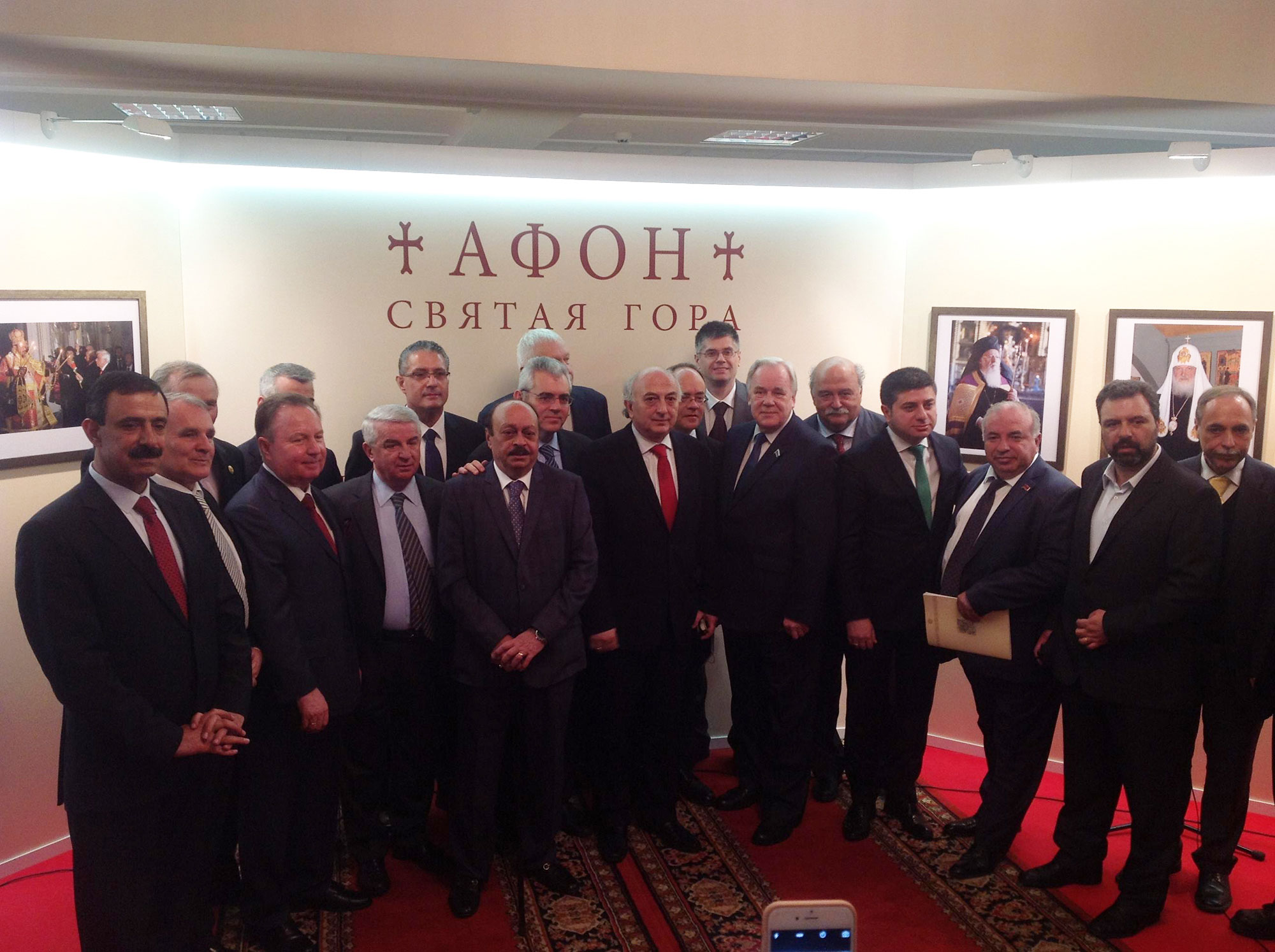 The exhibition was officially opened by the Chairman of the State Duma Mr. Sergey Naryshkin and the Vice-Speaker of the Hellenic Parliament Mr. Anastassios Kourakis representing the Speaker of the Hellenic Parliament. The greeting message of the Patriarch of Moscow and All Russia was read out by Bishop Antonio Bogorodsky, Director of the Moscow Patriarchate’s department for international foundations, and the leaders of all political parties: Mr. Vladimir Vasiliev, «United Russia», Mr. Gennadi Ziuganov, Russian Communist Party, Mr. Vladimir Zhirinovsky, Liberal-Democratic party of Russia and the member and representative of the party «Fair Russia» Mr. Aleksandr Tarnavskiy. The opening ceremony was also attended by the Greek Government spokeswoman Mme Olga Gerovasili, as well as parliamentarians-members of the I.A.O. from Albania, Armenia, Bulgaria, Cyprus, Georgia, Greece, Palestine, Romania, Serbia, Sudan and Russia, parliamentarians-members of the State Duma, Ambassadors and representatives of the I.A.O. member-states’ diplomatic authorities. It was also attended by Monks of Simonopetra monastery, which is indeed the owner of the precious material of Mount Athos Gallery. The President of the I.A.O. General Assembly Russian MP Mr. Sergey Popov and the I.A.O. Secretary General and Deputy Foreign Minister of Greece Mr. Ioannis Amanatidis spoke about the activity of I.A.O. 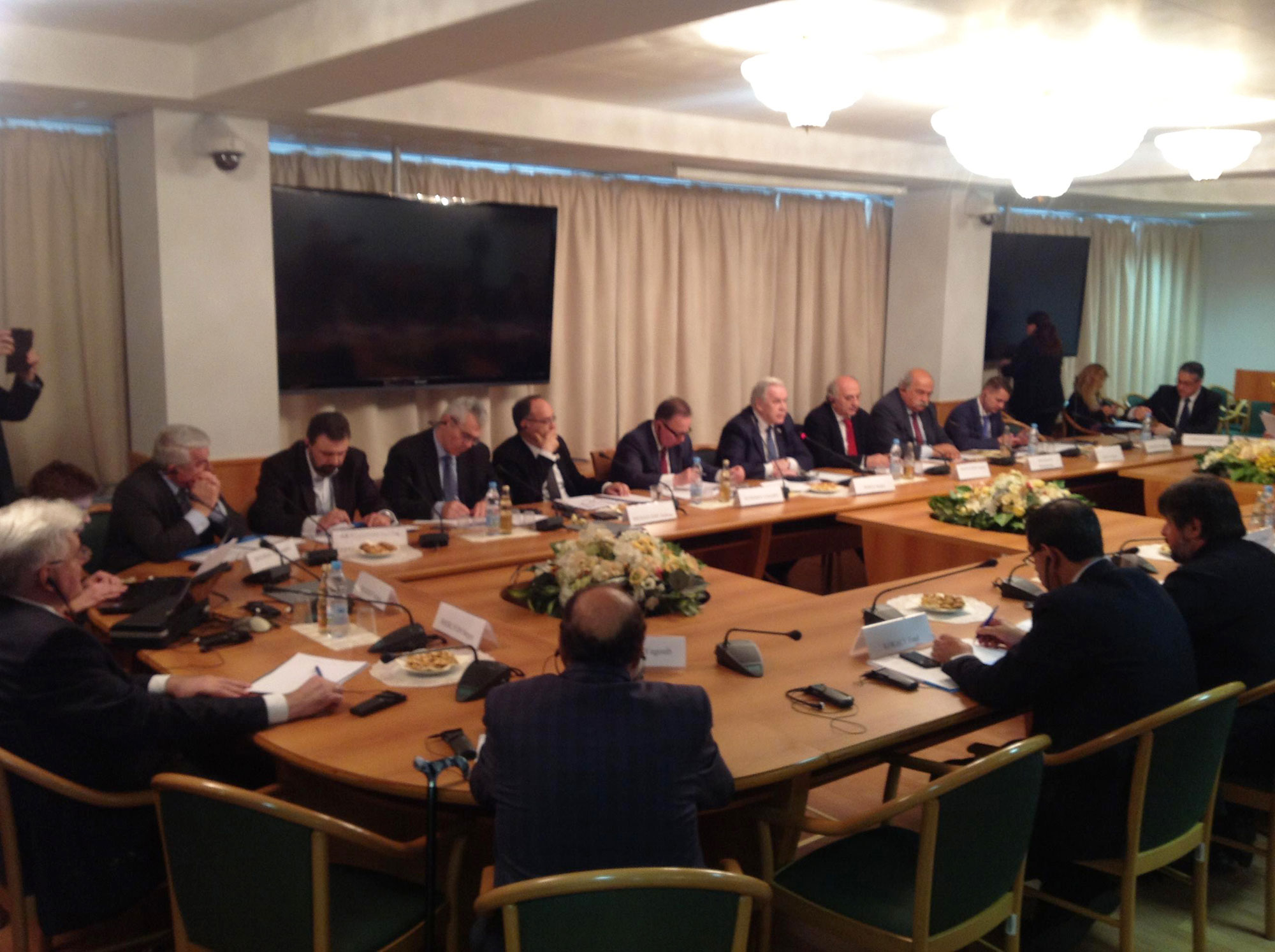 It is worth noting that the I.A.O. Secretary General and Deputy Foreign Minister of Greece Mr. Ioannis Amanatidis handed to the Chairman of the State Duma Mr. Sergey Naryshkin the exhibition catalogue in a case specially manufactured from pieces of rescue material of refugees arriving in Europe through the Greek islands of the Aegean Sea.
The regular meeting of the International Secretariat, Chairpersons and Rapporteurs of the I.A.O. Committees followed, where matters pertaining to the future activities of the organization were discussed. The meeting was closed with the adoption of a communication document of the International Secretariat on ways to resolve the complex problems in today’s world. «…The I.A.O. defends what peoples of the world have achieved against any attempt to restrict citizens’ rights. The major problems that sometimes lead to questioning the democratic achievements are resolved in favor of people’s interests only within the acquired democratic environment..».

Communication after the end of the meeting of the International Secretariat, the Chairpersons and Rapporteurs of the I.A.O. Committees.

Moscow, 3-6 April 2016. Meeting of the International Secretariat, Chairpersons and Rapporteurs of I.A.O. Committees.