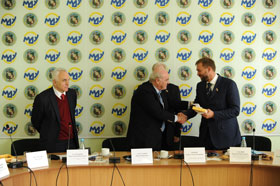 Members of the International Secretariat of the Interparliamentary Assembly on Orthodoxy (I.A.O.) visited Mariupol, Ukraine from 25 to 27 October 2012 and participated at the round table, which was organized by the I.A.O. in cooperation with Mariupol’s municipal authority. Subject discussed was: «Globalization challenges and Christian culture».
The event was held at the State University of Mariupol and the opening of the round table was declared by the President of the I.A.O. General Assembly Mr. Sergei Popov and the Mayor of Mariupol Mr. Yu.Khotlubei.
Greeting addresses were read by the I.A.O. Secretary General Mr. Anastasios Nerantzis, MP, the Chairman of the I.A.O. Committee on International Policy Mr. Dmitry Sablin, MP, as well as the Member of the Parliament of Ukraine Mr. A. Belyi.
In addition, reports were presented by the I.A.O. Alternate Secretary General Mrs. Eirini Dourou, the I.A.O. advisors Dr. Kostas Mygdalis and prof. Valery Alexeev, as well as Members of Parliaments-Members of the I.A.O. from Ukraine, Poland, Greece, scientists and Church representatives.
The event was followed by a reception offered by the Mayor of Mariupol in honour of all participants.
The I.A.O. delegation also visited the Town Hall, the Cathedral (which is under construction), as well as the Federation of Greek Communities of Ukraine.
It is worth mentioning that all expenses for the entire event were undertaken by Mr. Dmitry Sablin, member of the Russian State Duma, Chairman of the I.A.O. Committee on International Policy.