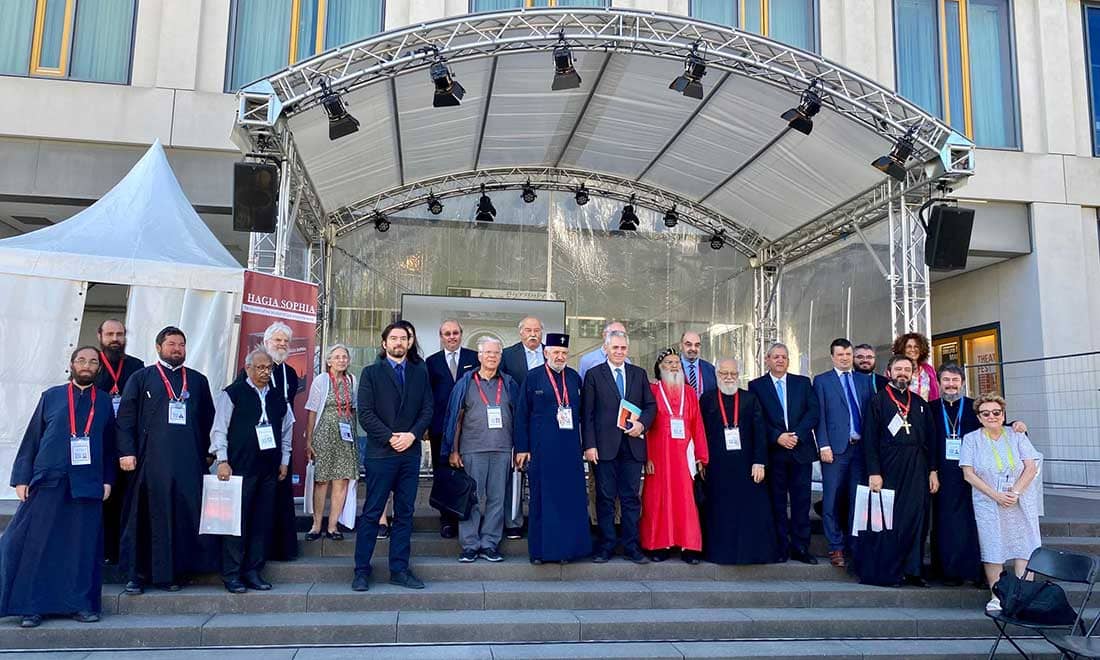 A delegation of the Interparliamentaty Assembly on Orthodoxy (I.A.O.) headed by the Secretary General Dr. Maximos Charakopoulos, with the participation of Mr. Ion Vulpescu, Member of the Parliament of Romania, Mr. Marinos Moushouttas, Member of the Parliament of Cyprus and the I.A.O. Advisors Dr. Kostas Mygdalis and Mr. Alexander Fomenko participated at the 11th Assembly of the World Council of Churches, held in Karlsruhe, Germany. On Friday, 2 September, in a special designed space the presentation of the Volume “Hagia Sophia. The Churches of the Wisdom of God around the world” took place. The volume was presented by the editor of the German publication, German Historian Dr. Ekkehard Kraft, while addresses were presented by the Secretary General of the World Council of Churches (WCC) Rev. Fr. Ioan Sauca and the Member of the Senate of Jordan Dr. Audeh Butros Quawas. The event was concluded with the main speech of the I.A.O. Secretary General Dr. Maximos Charakopoulos who stressed the following: «Turkey’s current Islamic rulers have decided to forcibly reverse history and convert the church back into a mosque. Since Hagia Sophia is a protected monument of the world cultural heritage, it shows a complete disrespect both for its history and for the international community. From that point forward, the damage to the church has steadily increased, as the Turkish media also revealed. Moreover, for any civilized person, provocative behavior occurs inside the church, like the image of an imam with a sword…our conviction is that in the face of this violation of history and culture, we must all speak out. We are persuaded that our initiative finds you, the participants of the General Assembly of the World Council of Churches, inclined to give ear and your desire to embrace it together». Representatives from the Ecumenical Patriarchate, the Patriarchate of Alexandria and All Africa, the Patriarchate of Romania, the Church of Cyprus, the Church of Greece, the Patriarchate of Moscow, the Church of Malankara, India, representatives of the Coptic Church and academics of various countries attended the presentation of the Volume. On the sidelines of the presentation and throughout the works of the 11th WCC Assembly, an exhibition stand with I.A.O. informative material was operated, in order to brief the public as well as the WCC participants. In fact, a certain number of copies of the Volume in English language was distributed to the public during its presentation.