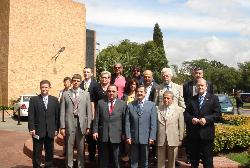 Following an invitation by the Orthodox communities in Johannesburg , the I.A.O. International Secretariat visited South Africa from November 30 to December 4, 2005. Members of the I.A.O. International Secretariat from Greece , Russia n Federation , Latvia , Australia and Ukraine as well as the member of the I.A.O. from the Parliament of Uganda participated in this visit. The valuable contribution of Archimandrite Ioannis Tsaftaridis, who undertook the organisation of the meetings as well as the contacts of the I.A.O. members in South Africa , was decisive to the realisation of this visit.
The members of the I.A.O. International Secretariat had the opportunity to meet with the Orthodox communities of South Africa from Greece , Russian Federation , Cyprus , Ukraine , Serbia , Bulgaria and Romania and recognize the tight relationship between the large Orthodox communities of South Africa . The Orthodox communities of South Africa positively contributed to the realisation of this visit with the exceptional hospitality they offered to the members of the International Secretariat. The members of delegation acknowledged as well that the major mission of the Orthodox Church in the depths of the Black Continent is focused in its charitable work. The I.A.O. members had the opportunity to present the activities of the organisation, to convey its goals and objectives, to present their views to the political and academic world of the city of Johannesburg on Africa’s severe and long-lasting problems, representing a considerable part on a global scale, and express productive views thereon aiming at finding viable solutions.