MEETING OF THE INTERPARLIAMENTARY ASSEMBLY ON ORTHODOXY (I.A.O.) WITH THE BUREAU OF THE PAN-AFRICAN PARLIAMENT AT ITS SEAT 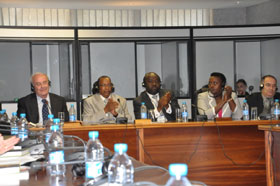 A Parliamentary delegation of the Interparliamentary Assembly on Orthodoxy (I.A.O.) consisted by the I.A.O. Secretary General Mr. Anastasios Nerantzis, MP, the I.A.O. Treasurer Mr. Michail Timosidis, MP, as well as, the Member of Parliament from Poland, Member of the I.A.O. International Secretariat Mr. Eugeniusz Czykwin and the Member of Parliament from Uganda, Member of the I.A.O. International Secretariat Mr. Theodore Ssekikubo visited Johannesburg, from 11 to 15 April 2010 and had a meeting with the President of the Pan-African Parliament Dr Moussa Idriss Ndele as well as members of the Bureau.

The aim of this meeting was to examine the possibility of permanent cooperation between the Pan African Parliament and the Interparliamentary Assembly on Orthodoxy (I.A.O.) by signing a cooperation agreement.
The Pan-African Parliament was established in March 2004 as one of the nine Organs provided for in the Treaty Establishing the African Economic Community signed in Abuja, Nigeria, in 1991. The establishment of the Pan-African Parliament is informed by a vision to provide a common platform for African peoples and their grass-roots organizations to be more involved in discussions and decision-making on the problems and challenges facing the continent.

This permanent cooperation can be materialized through the co-organization of various events (conferences, meetings) aiming at better understanding of the problems of Africa and their highlighting to the European and international field through the Parliament member-states. Furthermore, cooperation can result through joint activities of the Committees of both institutions through their common agendas. 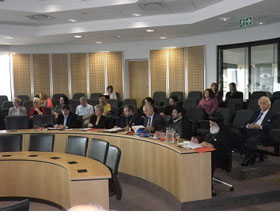 In addition, the members of the I.A.O. delegation participated in the conference organized by the seat of Modern Greek and Latin Studies of the Philosophical Faculty of the University of Johannesburg, with subject: «Extremism of Monotheistic Religions as undermining Social Cohesion».

The Vice-President of the Pan-African Parliament Mr. Joram Gumbo declared the opening of the works of the conference and reports on the subject were presented by academics, representatives of the Christian, Islamic and Jewish religions in South Africa, as well as distinguished personalities from the field of politics.

The conference was focused on the role of religions in modern society, as well as the approach the presented phenomena of fanaticism and intolerance.

It also approached major religions’ possibilities through specific forms of interventions and through their closer cooperation, free from expediencies and excessive nationalism, to contribute to mutual understanding and cooperation of people.