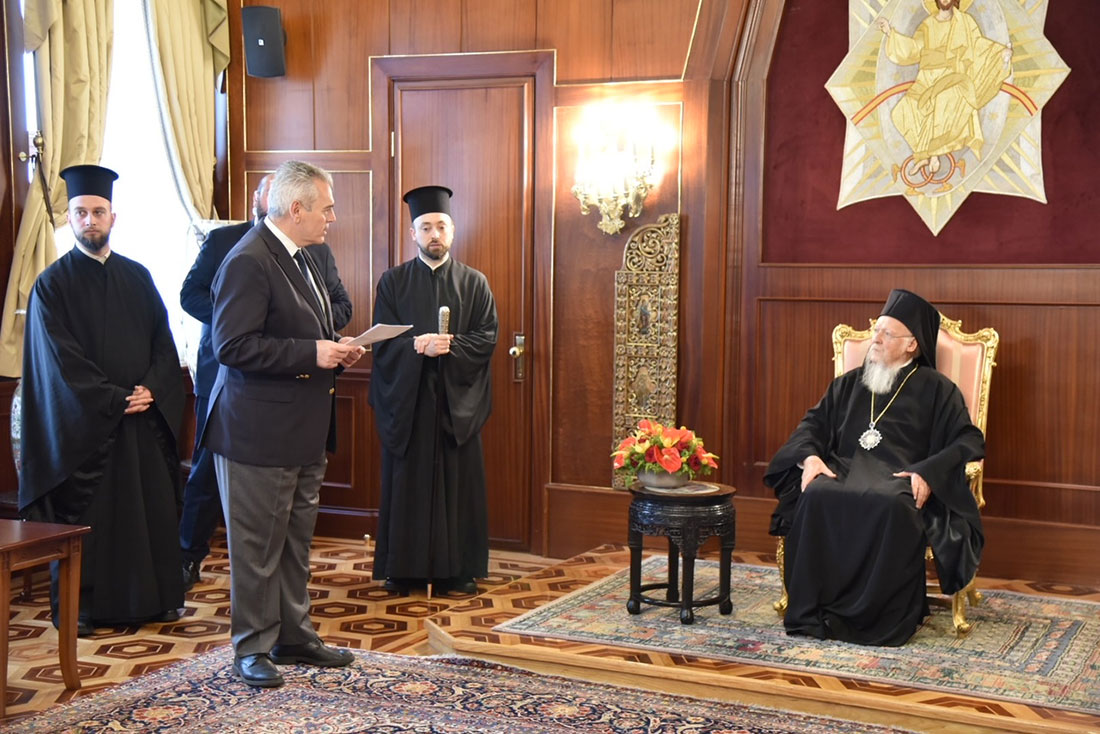 A delegation of the Interparliamentary Assembly of Orthodoxy (I.A.O.) visited the Ecumenical Patriarchate, 11-12 June 2022, to participate in the patriarchal and synodical Liturgy held at the Patriarchal Cathedral of St. George, on Sunday of Pentecost, at which the Archbishop Stefanos of Ohrid concelebrated, in the presence of the Prime Minister of North Macedonia Mr. Dimitar Kovačevski, ministers, metropolitans and numerous faithful citizens. The I.A.O. delegation headed by the Secretary General Dr. Maximos Charakopoulos, consisted by the MPs of North Macedonia, Mr. Mile Talevski and Ms. Ana Lashkoska, the MP from Romania, Mr. Ioan Vulpescu and the I.A.O. Advisor, Dr. Kostas Mygdalis. 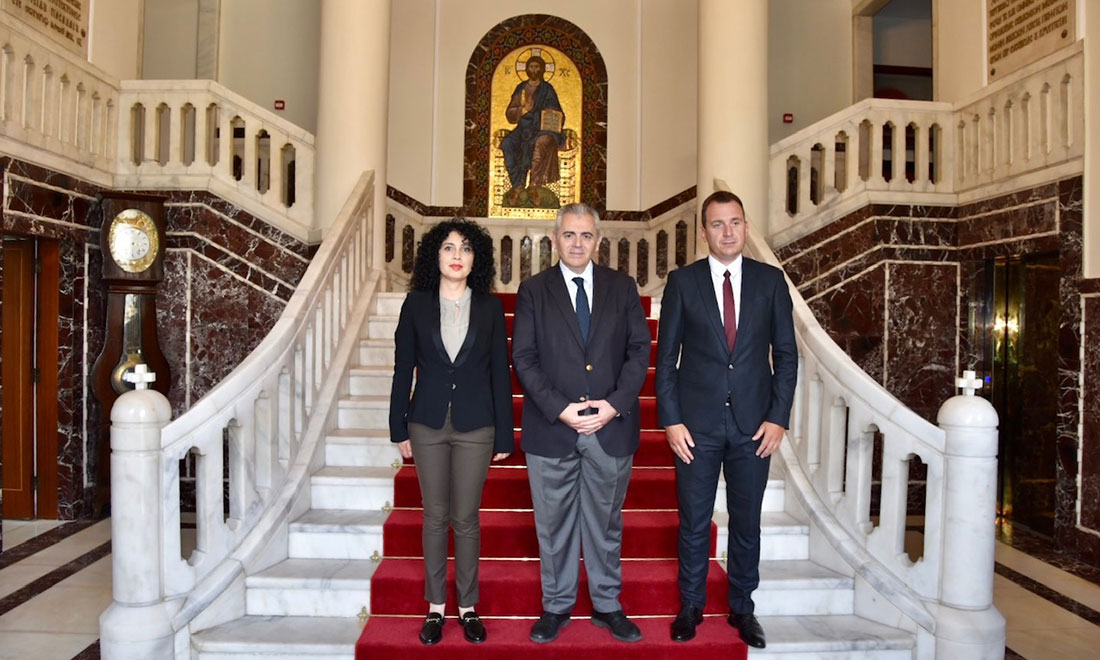 The representatives of the International Institution also had the opportunity to a meeting with His All Holiness the Ecumenical Patriarch Bartholomew and extend their wishes “Many Happy to come” personally, but also in writing in the book of wishes that has been opened at the Patriarchates for the Name Day of the head of the first throne Church of Constantinople (Istanbul). The head of the delegation noted, “The historian of the future will record as wise your long pastorate at the helm of the Great Church of Christ.” Referring to the restoration of communion between the Ecumenical Patriarchate and the Archdiocese of Ohrid, the Secretary General stressed: “We hope and wish that the end of this process will not have setbacks and that it will be the one that you clearly suggested, so that we can enter a new period for this Church, as well as for Orthodoxy in the Balkans as a whole, which many times has suffered in the last 150 years … In the case of the recognition of the Archdiocese of Ohrid, as the only one who can do this, from your position as the Ecumenical Patriarch, you provide the right framework by defining all the necessary conditions for its completion. First, the name of the Archdiocese, which cannot refer to ethno-racial delusions that have so much afflicted Orthodoxy, and, secondly, the ecclesiastical borders of this Archdiocese exclusively within the territory of the state of North Macedonia … We are happy that in your days a wound that has been gaping open for over half a century is now healing. May the “peace be with you” be put into practice in Ukraine as well”. 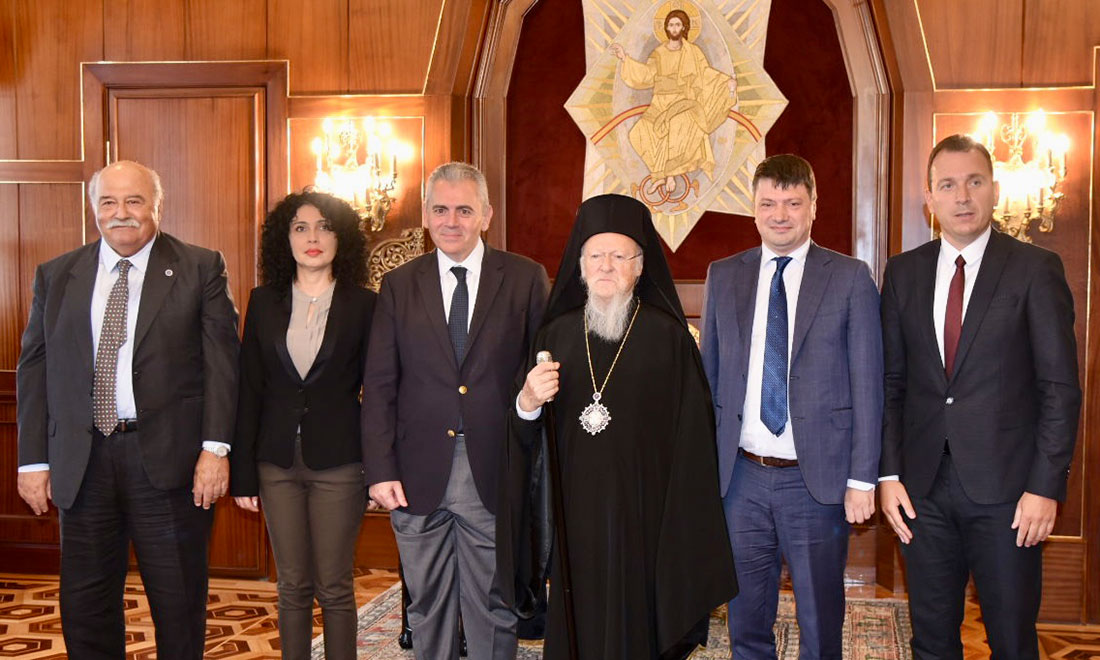 In his address, the Ecumenical Patriarch applauded the work of the I.A.O. and congratulated both the Secretary General and the Advisor, while emphasizing that “The mother church of Constantinople (Istanbul) is very pleased, because with the Grace of God and blessing of the Holy Spirit this historic decision for re-admission of the people of North Macedonia into the Orthodox family was reached on May 9th, who for almost six decades were excluded from the canonical communion with the rest of the orthodox around the world “. Referring to the war in Ukraine, he expressed his sorrow “greater on the attitude of the Holy Church of Russia, which completely blesses this war through Patriarch Kirill. In an interview, I gave on Greek television, I said that my brother, His Beatitude the Patriarch of Moscow, had to rise above such situations and condemn the war, even if it would cost him his Patriarchate. Not only did he not do this, not only did he agree with President Putin, but also he is in favour, attempting to give a metaphysical dimension to this war. And this attitude is worse than the cessation of communion with the Mother Church of Constantinople (Istanbul), which preceded because of the Autocephaly of the Ukrainian Church, which was rightly given by the Ecumenical Patriarchate.”

Istanbul 11-12 June 2022. Official visit of I.A.O. delegation to the Ecumenical Patriarchate in Istanbul