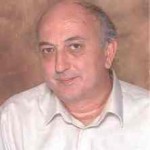 Member of Parliament, SY.RIZ.A., Thessaloniki A
He was born in 1961 in Kilkis. His parents were both teachers. He lived in Terpni- Serres until 1978, since then he has been living in Thessaloniki.

He graduated from the Οil Chemical Department of T.E.I. Kavalas in 1981 and from the Teachers΄ Training College of Thessaloniki in 1985.
Since 1985, he has been working as a teacher in primary schools of Kalamaria, in Thessaloniki.
He is married to Stamatia Moustaka, a teacher, and he is father of two children.