One-day Conference with subject: “The development of Church – State relations according to Apostle Paul and the Eastern Orthodox tradition”. 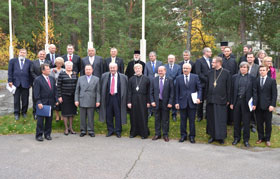 The Interparliamentary Assembly on Orthodoxy (I.A.O.) held a one-day conference in Helsinki on October 18, 2011 with subject: “The development of Church – State relations according to Apostle Paul and the Eastern Orthodox tradition”.
Members of Parliaments – members of the I.A.O. International Secretariat and the I.A.O. Committee on International Policy from Greece, Cyprus, Ukraine, Romania and Albania participated at the conference. Moreover, distinguished personalities from the fields of religion, politics, as well as thinkers in the field of Christianity such as Mr. Anssi Joutsenlahti, Deputy Speaker of the Finnish Parliament, Mrs. Tarja Filatov, member of the Finnish Parliament, Mr. Mitro Repo, Member of the European Parliament, His Eminence Metropolitan Ambrosius of Helsinki, Mrs. Irja Askola Bishop of the Evangelical-Lutheran Church of Finland and others participated at the conference.
Reports were presented by: Prof. Mr. Petros Vassiliadis, School of Theology of the Aristotelian University of Thessaloniki with subject: “Orthodoxy and modernity and the Legacy of St. Paul for the Church-State Relations”, Prof. Mr. Vladimir Glagolev, School of Philosophy of the State University of International Relations of Moscow (MGIMO) with subject: “The cultural procedures as an aspect of Church-State relations”, Prof. Mr. Valery Alexeev, Advisor to the I.A.O. International Secretariat on the subject of the conference, as well as Dr. Kostas Mygdalis, Advisor to the I.A.O. International Secretariat with subject: “Church – State relations and new technologies”.
The works of the conference were concluded with the adoption of the text of conclusions of the conference. 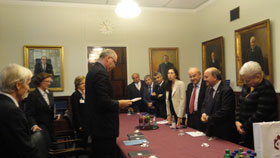 The International Secretariat of the Inter-parliamentary Assembly on Orthodoxy (IAO), in cooperation with the Parliament of Finland, the Orthodox Diocese of Helsinki and the SOFIA cultural centre, upon responsibility of the IAO Committee on International Policy, organized a one-day conference on the subject “The development of Church – State relations according to Apostle Paul and the Eastern Orthodox tradition”, on Tuesday, 18 October, 2011. Members of Parliament, political figures, personalities from the world of science and academia as well as representatives of the Christian thought and the Church attended the works of the conference. Following the lectures and papers presented, the conference reached its main conclusions as follows:
It is well known that Orthodoxy is at the origin of the formation of national self-consciousness and statehood in many countries of Europe and the world. Religious freedom is a basic constitutional principle and a fundamental right for each and every individual and as such is protected by the State, which must prevent any violation of religious freedom.
The conference recorded the need to affirm the distinct roles of the State and the Church in the modern world, highlighting the positive role the Inter-parliamentary Assembly on Orthodoxy (I.A.O.) could play in mediating the relations between these two poles.
The State, as one of the dominant institutions in civil society, bears the responsibility not merely for the military-political security and social prosperity of citizens, but also for the prevailing views on morality, the family well- being, and the high spirituality of the people. In this respect, we consider the Church as working in complementarity with the State, as part and parcel of society, of which it is the spiritual and moral foundation.
A perception of the State as an exclusively administrative institution, rid of all traditions and ethical rules and any social and moral responsibility, does not contribute to the solution of modern societies’ numerous moral problems.

The effort to build a civil society without the contribution of the Church leads increasingly to a new “secular totalitarianism” which aims at “ridding” society of all forms of influence by the Church, marginalizing it from the public life, preventing it from publically expressing its moral assessments or judging the decisions and practices of the established power.
The Church, without relinquishing its principles, has to create a context of sincere dialogue for the consolidation of democratic institutions in modern societies and to defend the idea of cultural pluralism and multiculturalism as a necessary ingredient of all modern societies and of its own current confession.
The States have to comprehend the salvation presence of the Church for two millennia in the world, and to use the means they dispose of to safeguard the Orthodox Churches’ presence in regions of political unrest and crisis. In countries where the Orthodox are a minority, in the Middle East especially, there is a risk that the State slides towards protectionist policies of the prevailing religious confession and disrespect for other religious and cultural particularities, this leading to violations of the fundamental civil and political rights.
The Church and the State, in the present period of deep spiritual and financial crisis, are required to strengthen their cooperation on all fronts, to the direction of voting, in parallel to the internationally protected Human Rights, a Declaration of Human Responsibilities, for the benefit of the financially weaker social groups and the natural environment.