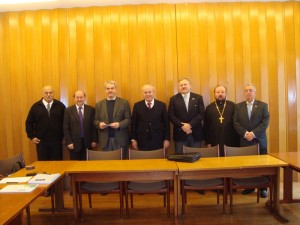 The I.A.O. Alternate Secretary General Mr. Anastasios Nerantzis with the participation of Mr. Michail Pantoulas, Head of the Hellenic Parliamentary delegation to the I.A.O., Mr. Konstantin Zatulin, Chairman of the I.A.O. Committee on International Policy, Mr. Mkrtych Minasyan, Member of the I.A.O. International Secretariat and Dr. Kostas Mygdalis, I.A.O. Advisor, visited the World Council of Churches (WCC) at its seat in Geneva, 14 December 2010 and had an official meeting with the new WCC Secretary General Rev. Dr. Olav Fykse Tveit.
During the meeting, Dr. Tveit, presented the WCC objectives and activities and pointed out the I.A.O.’s potential for being a valuable collaborator to the WCC towards achieving its goals.
The I.A.O. Alternate Secretary General Mr. Anastasios Nerantzis presented, in turn, the I.A.O.’s goals and annual activity, stressing the objectives’ identification of both organizations, although the I.A.O.’s nature is rather political than religious. Moreover, Mr. Pantoulas, proposed the organisation of future joint activities between the two organisations, while Mr. Zatulin invited the WCC Secretary General to participate as a rapporteur at the 18th I.A.O. General Assembly in Paris. 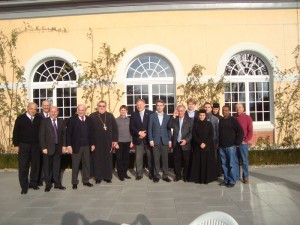 A meeting, in a warm climate was realised as well with the Secretary General of the Conference of European Churches Rev. Prof. Dr. Viorel Ionita, at the organisation’s offices; the members of the I.A.O. delegation also met with the Director of the Ecumenical Institute of Château de Bossey Rev. Prof. Dr. Ioan Sauca and its Orthodox students.
Mr. Minasyan congratulated the Institution’s work; as a place for exchanging views among Christian Churches.