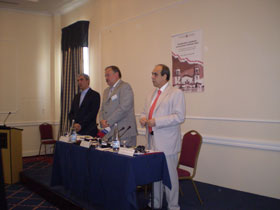 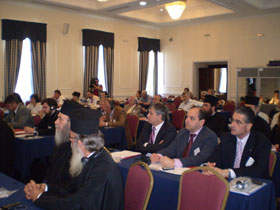 1. The global economic crisis and the economic situation in the countries of Orthodox tradition,
2. The orthodox ethics and the market economy; the compatibility issue,
3. The cooperation ideas, models and forms in the Orthodox countries under economic crisis.

Political personalities of the I.A.O. member-states participated as rapporteurs. In addition, representatives of the Government, members of Parliaments, religious personalities from the Russian Patriarchate and distinguished scientists, who have expressed their views relating to the subject of the conference, participated as well.

Participants also attended the Holy Liturgy for the celebration of St. John the Russian on Wednesday, 27 May 2009.