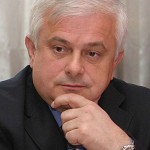 Mr Emilo Labudović was born on 4th January 1957, in the village of Šekular, municipality of Berane, where he also completed the primary school. He graduated from the Gymnasium in the former Ivangrad and from the Faculty of Political Science with a major in Diplomacy in Belgrade, in 1980.

For many years, he worked as a journalist at the Television of Montenegro, and he has been in politics as of 1998. He was the President of the National Socialist Party, which later, together with the Serbian National Party, merged into the New Serbian Democracy, with him as the Vice President.