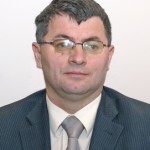 Group for North and South America, Australia, Oceania and Japan

Member of the House of Representatives of the Parliamentary Assembly of Bosnia and Herzegovina from 2006 to 2010.