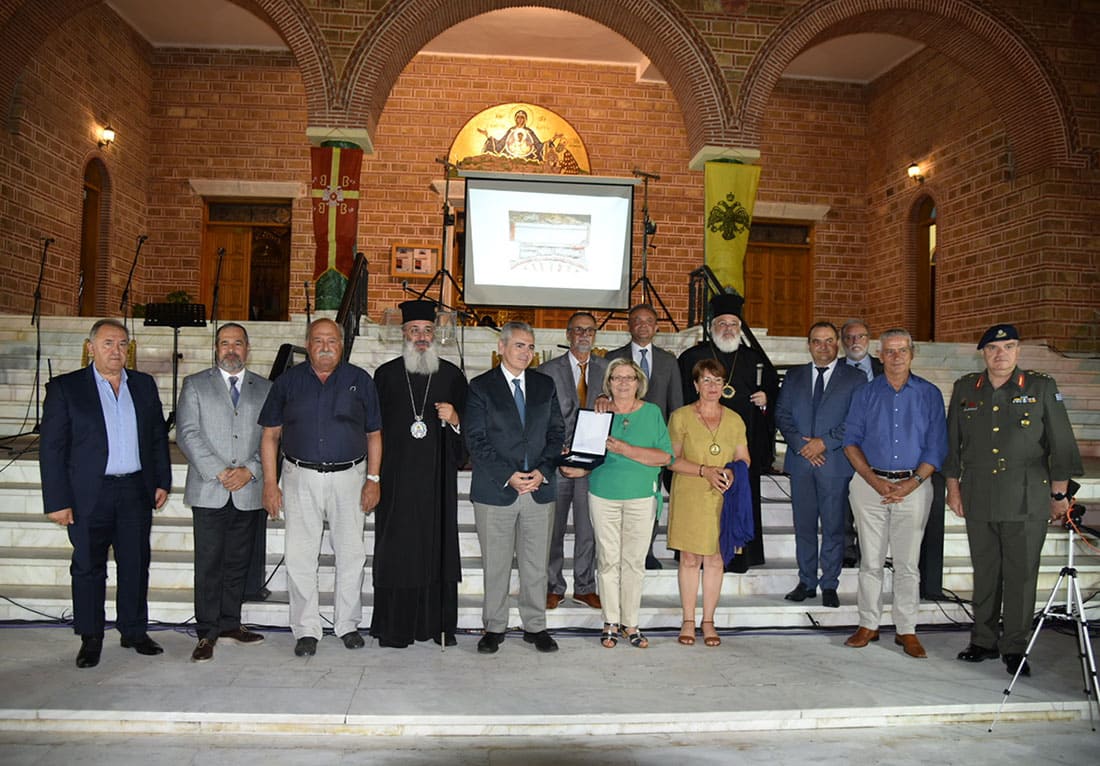 A delegation of the Interparliamentary Assembly of Orthodoxy (I.A.O.) headed by the Secretary General Dr. Maximos Charakopoulos with the participation of the I.A.O. Treasurer Mr. Stavros Keletsis and the I.A.O. Advisor Dr. Kostas Mygdalis, visited Didymoteicho for the presentation of the unique publication of the I.A.O. entitled: “Hagia Sophia: The Churches of the Wisdom of God around the World”. The presentation of the Volume took place on Friday, July 29th, 2022 in the Courtyard of the Panagia Eleftherotria Cathedral, in the presence of representatives of the political, academic and religious community of the region. Addresses were presented by the I.A.O. Treasurer Mr. Stavros Keletsis, His Eminence Metropolitan Damaskinos of Didymotichon, Orestias and Soufli and the Mayor of Didymoteicho, Mr. Romylos Chatzigiannoglou. The President of the Department of History and Ethnology of the Demokritus University of Thrace, Professor Georgios Tsigaras, presented the volume. The event was concluded with the speech of the I.A.O. Secretary General Dr. Maximos Charakopoulos. The I.A.O. Secretary General, during his meeting with His Eminence Metropolitan Damaskinos of Didymotichon, Orestias and Soufli, referred to the pivotal role of the Metropolises of Thrace in promoting the peaceful coexistence of all Thracians, regardless of religion. He also had the opportunity to meet with the Mayor of Didymoteicho, Mr. Romylos Chatzigiannoglou, whom he thanked for co-organizing the event for the presentation of the Volume. On the sidelines of the presentation of the Volume, the I.A.O. delegation met with the Member of the Hellenic Parliament from the region Mr. Anastasios Dimoschakis, the Member of the French National Assembly Mrs. Marietta Karamanli, the Deputy Regional Governor Mr. Vasilios Delistamatis, the General Commander of the XVI Division Mr. Theodoros Hatzigeorgiou and the Vice Chancellor of the Democritus University of Thrace Professor Mr. Raphael Sandaltzopoulos. In the framework of the I.A.O. visit, a visit to the catholicon of the Byzantine Monastery of Panagia Kosmosotira – built by Isaakios Komnenos – in Ferres was realized and information was given on its restoration work, as well as a guided tour by the archaeologist Mrs. Lila Sambanopoulou to the outstanding Byzantine Museum of Didymoteicho.

Karlsruhe, Germany, 2 September 2022. Presentation of the Volume “Hagia Sophia. The Churches of the Wisdom of God around the world”

Rome, 28 August 2022. Offering the Volume «Hagia Sophia: The Churches of the Wisdom of God around the World» to His All Holiness Pope Francis