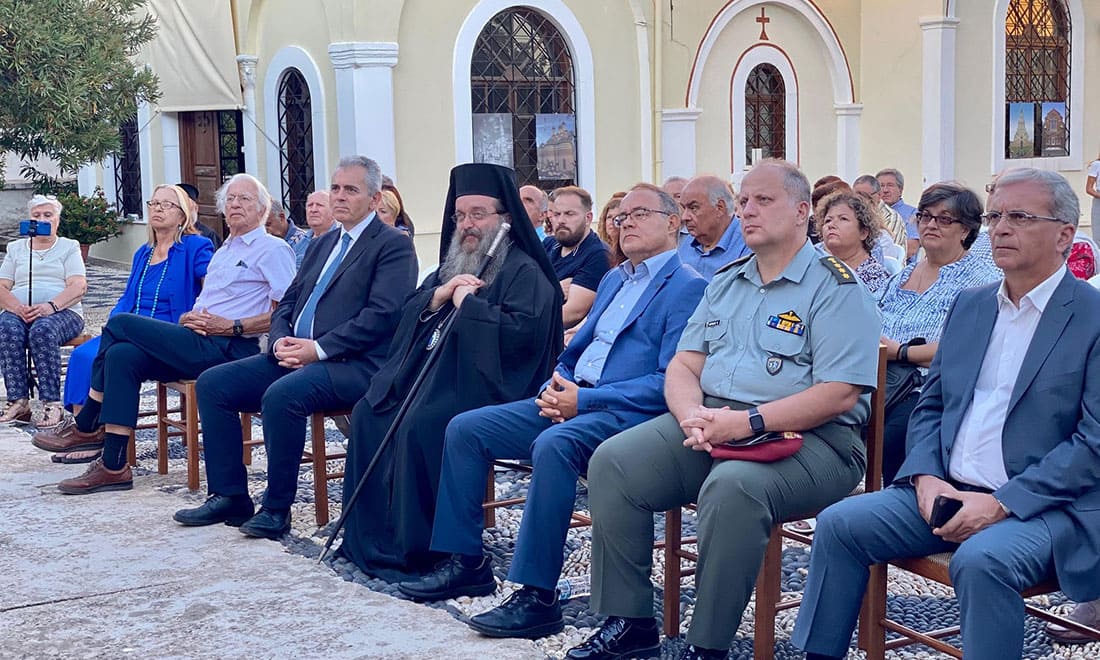 A delegation of the Interparliamentary Assembly on Orthodoxy (I.A.O.) headed by the I.A.O. Secretary General Dr. Maximos Charakopoulos, visited Chios island for the presentation of the Volume “Hagia Sophia: The Churches of the Wisdom of God around the World”, which was held in the courtyard of the Holy Monastery of St. Minas, in collaboration with the Cultural and Educational Association of Neochorion St. Minas. At the presentation, the I.A.O. Alternate Secretary General Dr. Andreas Michailidis as well as His Eminence Metropolitan Markos of Chios, Psara and Oinousses addressed the participants, while the Architect Mr. Manolis Vournous, Dr. Athina Zacharou-Loutrari and the theologian Mr. Nikos Kostalos presented the Volume. The moderator of this event was the I.A.O. Advisor Dr. Kostas Mygdalis. During his keynote address, the I.A.O. Secretary General highlighted, inter-alia: “this publication is an answer to a Genocide of Memory, which is being observed the recent years in Turkey. As you already know, following the fall of the Ottoman Empire and the establishment of the Turkish Republic, an element of the secularization of the new Turkish state was the conversion of the Hagia Sophia mosque (converted into a mosque by the prophet after Fall of Constantinople) into a museum. Since the 30’s and up to two years ago, it was accessible to every citizen of the Ecumene. Two years ago, the Turkish Government, confirming its neo-ottoman visions, included the Hagia Sophia Church in the overall strategy of the instrumentalization of religion for reasons of attaining political goals. Hence, converted Hagia Sophia into a mosque”. The event was attended by Government officials, representatives of the Regional Authorities, officers of the armed forces and distinguished members of the academic community. During the event, Metropolitan Markos of Chios, Psara and Oinousses, recognizing the contribution of the I.A.O. to the Church, rewarded the I.A.O. leadership with the Golden Cross of Saint Isidoros. Following the event, the participants were guided to the Museum dedicated to the Massacre of Chios, located at the Monastery of Saint Minas. Additionally, the I.A.O. delegation had the opportunity to attend the consecration of the student shelter “Maria’s House” of the Tsakos Foundation in Kardamyla, Chios for the beginning of the new school year, where they were guided around its facilities by the Director Ms. Paraskevi Liadi. Since 2013, “Maria’s House” has hosted students from all over the country who wish to follow the maritime profession. During the visit, the I.A.O. Secretary General offered the Director of the “Maria Tsakos” Foundation, Mr. Michalis Belegris, the Volume “Hagia Sophia: The Churches of the Wisdom of God around the world”.