Mr. Alojz Peterle, ex. Prime Minister of Slovenia, Head of the Members of the European Parliament organizing the Prayer Breakfast welcomed the I.A.O. delegation and expressed his pleasure for the I.A.O.’s interest on the event.

In addition, the I.A.O. delegation participated to the round table discussion of the European Christian Political Movement (ECPM) presided by the Head of the European Parliament’s Intergroup on freedom of religion or belief and religious tolerance Mr. Peter van Dalen. The round table’s topic was on the need for ethics in the banking system. 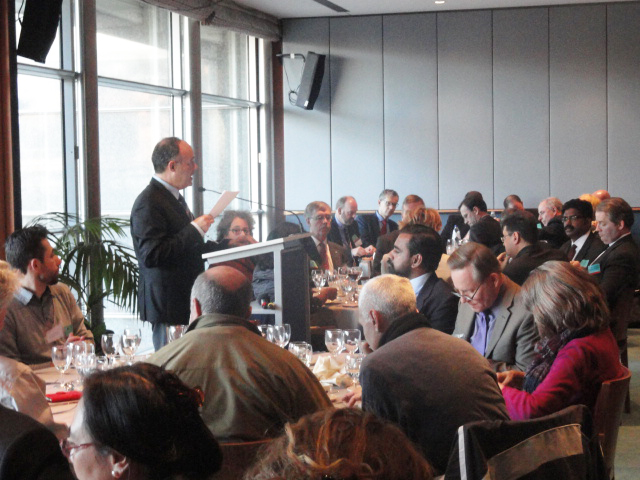 During the lunch offered in honour of the participants Mr. Michailidis presented a speech and said inter alia:
«…The intense refugee flows of the last months, mainly from Syria, but also from other war-inflicted or unstable regions of the world, pose a series of political and economic challenges for the European “transit” and host countries, as well as for the entire European Union. As you are well aware of, these challenges are related to the rescue, registration and issuing of documents, provision of food, healthcare, housing and finally the social and economic integration of refugees. Beyond the administrative, managerial and political challenge, the refugee crisis also puts to the test the cohesion of European societies’ social fabric, as well as the cohesion among European countries, which are called upon – and required – in the context of the European Union, to cope with this humanitarian and political crisis jointly, displaying humane feelings and solidarity. On a third level, the refugee crisis raises questions to citizens and collective entities, such as the ones represented by your organization, in relation to translating Christian teaching into practice and action…».