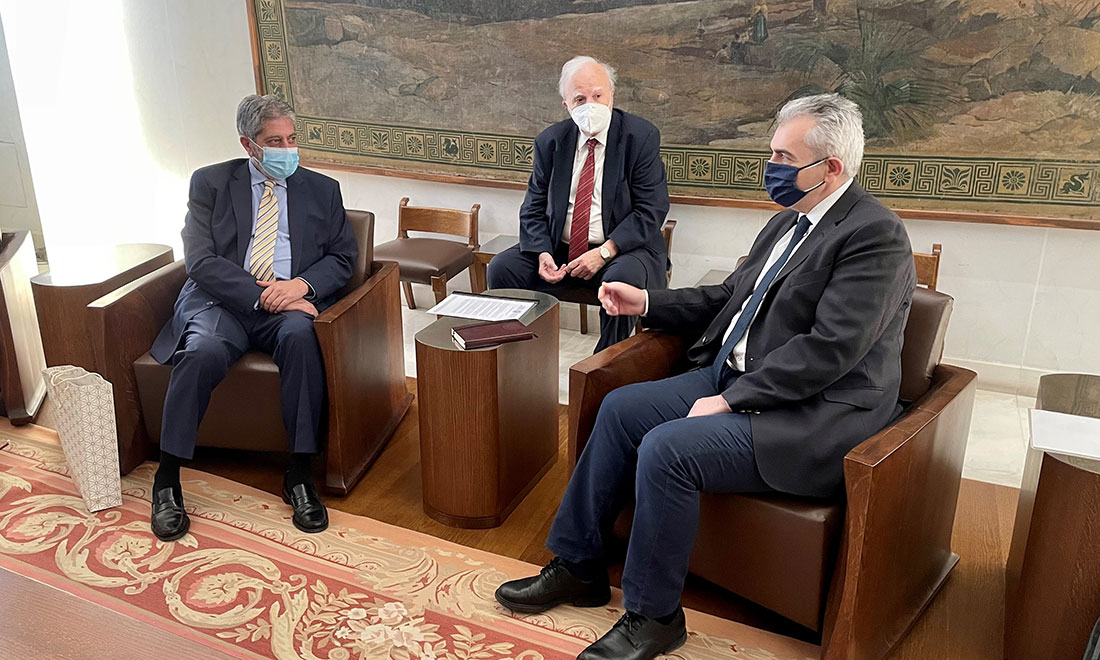 “As the Interparliamentary Assembly on Orthodoxy, we work with perseverance and thoughtful-ness, focusing on strengthening co-operation relations among all religious groups in the Middle East. We hope that with a joint effort we can disregard the voices of intolerance and hatred.” The aforementioned was emphasized by the Secretary General of the Interparliamentary Assembly on Orthodoxy (I.A.O), Member of the Hellenic Parliament, Dr. Maximos Charakopoulos, during the meeting with the Ambassador of Palestine in Athens, Mr. Marwan Toubassi, on the request of the Palestinian diplomat.

At the meeting, which was held in the Hellenic Parliament (headquarters of the international in-stitution) the Palestinian Ambassador, briefed the IAO Secretary General on the latest tragic events in Palestine and Israel, with the escalation of violence. He outlined the Palestinian Au-thority’s position on the responsibility for this development, which resulted in the loss of dozens of lives, including many children.

On his part, Mr. Maximos Charakopoulos thanked the Ambassador for the detailed information, as well as he requested for more information on the Christian community of Palestine and espe-cially the Orthodox community, which constitutes the majority of Christians, and belongs to the ancient Greek Orthodox Patriarchate of Jerusalem. As it was pointed out, the Christians, which during the 1930s had reached up to 25-30% of the Palestinian population, today they have dra-matically shrank by 1.5% of the population.

The I.A.O. Secretary General referred to the risk of Christians’ extinction from the cradle of Christianity, the Holy Land, and the need to alert every-one to the prevalence of peace, and the return of Christians who were forced to leave their ances-tral homes after the “Arab Spring”.

Mr. Maximos Charakopoulos noted that as an international institution bringing together Ortho-dox MPs from parliaments of 25 countries, including Palestine, the IAO has taken international public awareness initiatives, such as:

a) The publication of a 4-language volume with the reports of the international conference that took place in Beirut for the “Coexistence of Christians and Muslims in the Middle East”.

b) The cooperation with the World Muslim League, seated in the holy -for the Muslims- city of Mecca, for the signing of a Memorandum of Understanding with the aim of sharing and mu-tual understanding of the peoples.

c) The signing of a Memorandum of Understanding of the I.A.O. and the National Kapodistrian University of Athens, which includes the creation of an institute / observatory to record the timeless presence of the Christians in the Middle East, the ongoing persecution and the encouragement of initiatives for peaceful coexistence.

Mr. Charakopoulos underlined that “blind violence cannot be a way to resolve any dispute. We hope that logic will soon prevail and that the instrumentalization of religion for political purposes will cease, with the most characteristic example, the conversion of Hagia Sophia into a mosque by the Turkish leadership”.

Athens, 4 June 2021. Meeting of the I.A.O. Secretary General with the Ambassador of Palestine. Christians at risk of extinction in the Holy Lands.