Presentation of the Festschrift “Church-Ecumene-Politics” on Metropolitan Damaskinos Papandreou 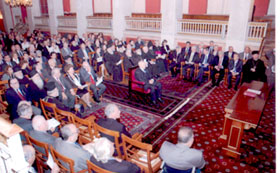 On Wednesday, 31 October 2007, the Interparliamentary Assembly on Orthodoxy (I.A.O.) and Mr. Aristotelis Pavlidis, head of the Greek delegation to the I.A.O hosted the presentation of the Festschrift in honour of His Eminence Damaskinos Alex. Papandreou, Metropolitan of Adrianopolis and University Professor. The subject of the Volume is: «Church-Ecumene-Politics». The event, which was co-organised with the National and Kapodistrian University of Athens, was held at theGreat Hall of Ceremonies of the University of Athens.

During the ceremony –inter alia- the Former Secretary General of the Interparliamentary Assembly on Orthodoxy (I.A.O.) Mr. Stylianos-Angelos Papathemelis presented a greeting message of the President of the I.A.O General Assembly, Member of the Russian State Duma Mr. Sergei Popov in honour of His Eminence Damaskinos Alex. Papandreou, Metropolitan of Adrianopolis.