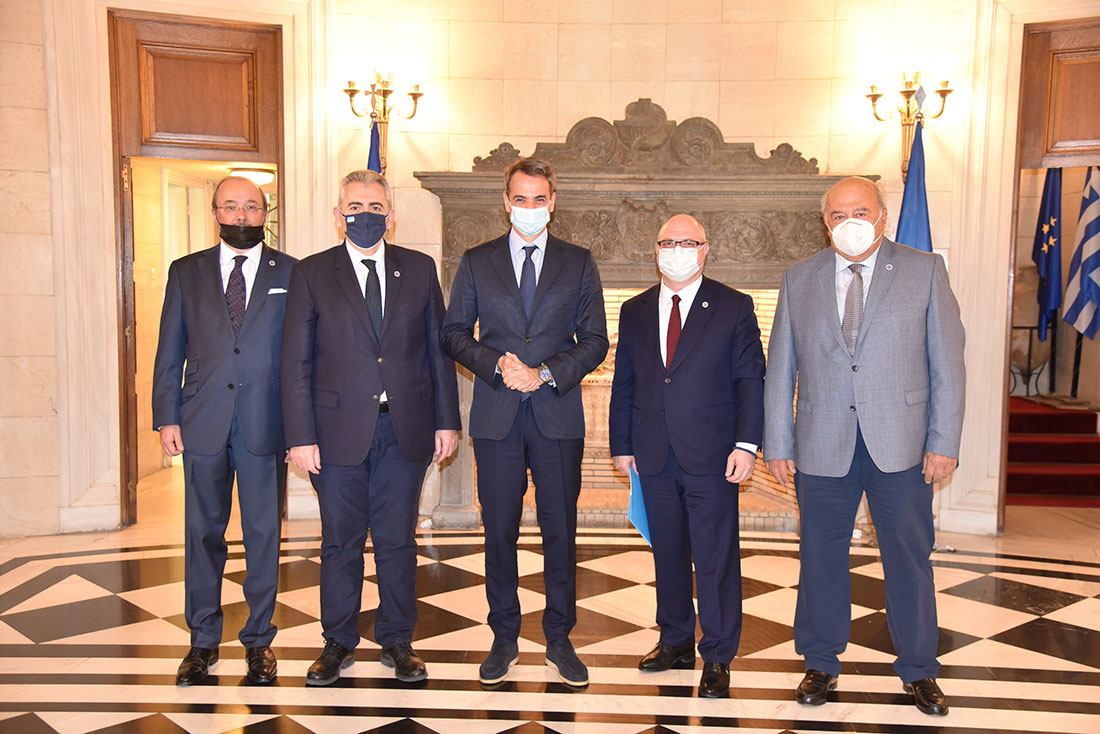 The Secretary General of the Interparliamentary Assembly on Orthodoxy (I.A.O.), member of the Hellenic Parliament, Dr. Maximos Charakopoulos and the President of the I.A.O. General Assembly member of the Russian State Duma, Mr. Sergei Gavrilov, realized a series of meetings with the political, state and religious leadership of Greece on 24-25 May 2021. Specifically, they had a meeting with the Prime Minister of the Hellenic Republic, Mr. Kyriakos Mitsotakis, the President of the Hellenic Republic Mrs Katerina Sakellaropoulou, His Beatitude Ieronymos, the Archbishop of Athens and All Greece and the Speaker of the Hellenic Parliament, Mr. Konstantinos Tasoulas. The I.A.O. leadership was accompanied by the I.A.O Advisors, Dr. Kostas Mygdalis and Mr. Alexander Fomenko. 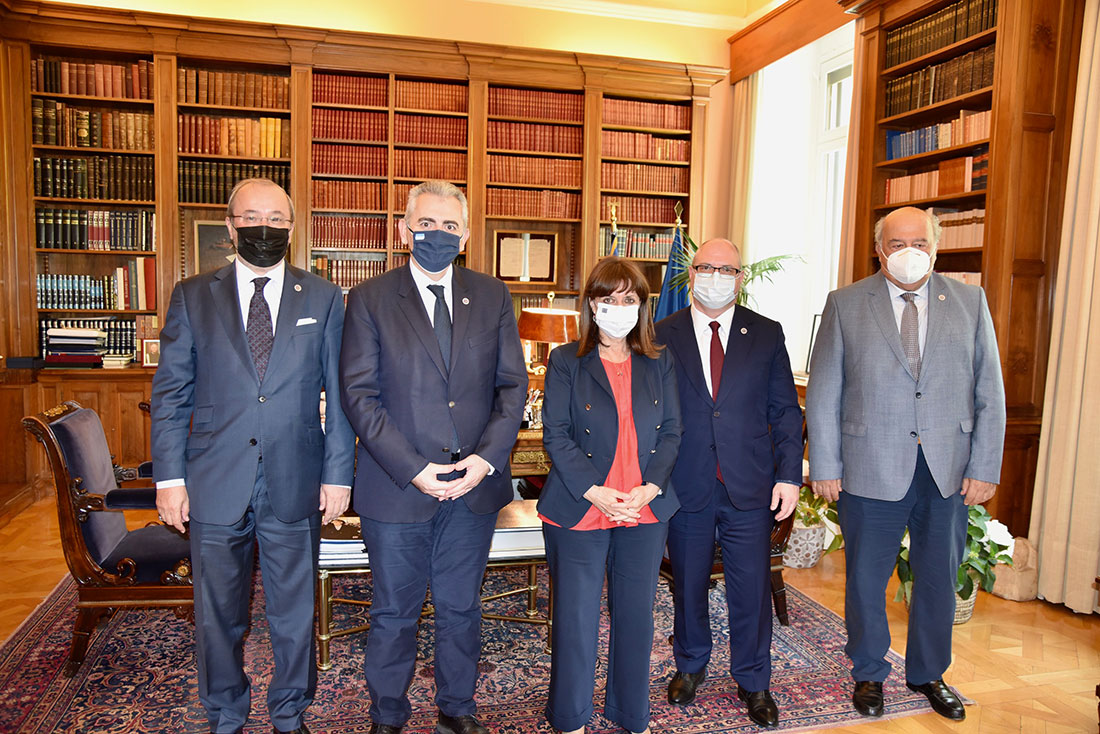 During these meetings, the I.A.O. leadership presented the undertaken activities on the awareness-raising of the international public opinion concerning the issue of the arbitrary conversion of Hagia Sophia into a mosque, including: a) the publication of a commemorative four-language album on emblematic Churches dedicated to the Wisdom of God, b) the International photo competition on the Churches dedicated to the Wisdom of God all over the world and c) the submission of proposal on the “European cultural route of the Wisdom of God Monuments (Hagia Sophia)” and its recognition by the Council of Europe. Moreover, the political and religious leaders of Greece were informed on the imminent cooperation between the I.A.O and the Muslim World League (MWL), seated in the holy city of Mecca in Saudi Arabia, aiming towards reconciliation and mutual understanding among peoples. The I.A.O Secretary General and the President of the I.A.O General Assembly announced the publication of a commemorative volume titled “The inter-orthodox presence of Mount Athos during the years of Ottoman rule (1430-1912)”. Finally, they informed of the preparation of the 28th I.A.O General Assembly to be held in July in the island of Crete. 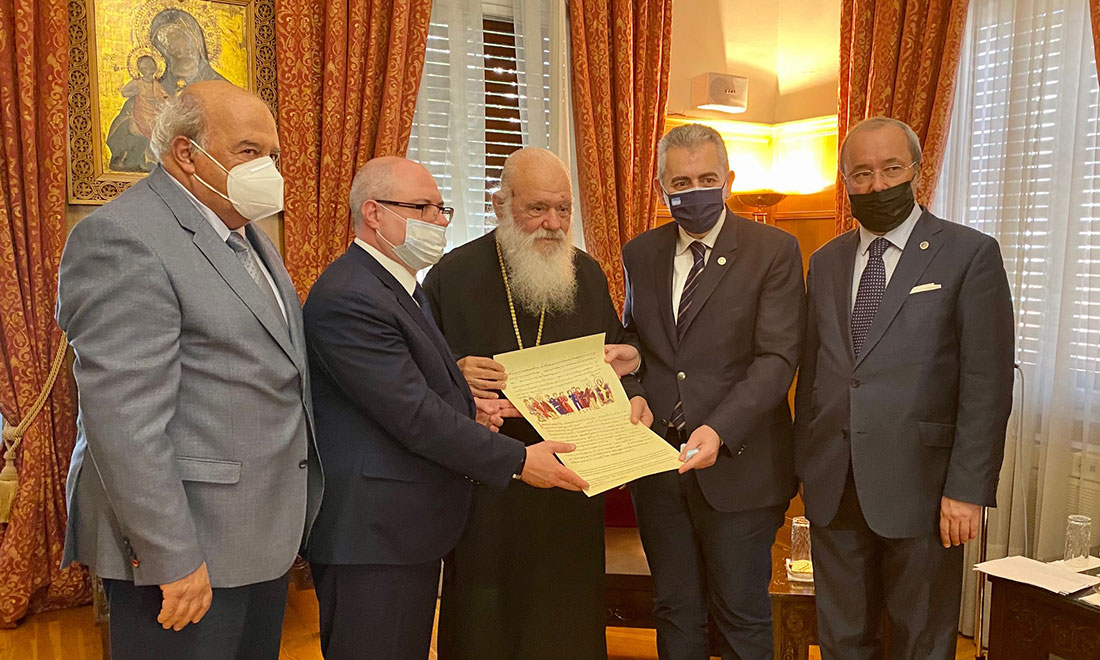 Welcoming the I.A.O leadership, His Beatitude Ieronymos, praised its work and expressed his pleasure “on the initiatives you have undertaken, for your cooperation with the National and Kapodistrian University of Athens (NKUA) and all of your efforts”. Regarding the “difficulties within the Orthodox Churches and the people who represent them”, he said that he believes that “even in the most sacred things mistakes are made. But, Christ, tells us that these mistakes can be improved, corrected, as long as we really want it deep in our souls. Whether we are in Greece, or Russia, or Ukraine, wherever we happen to be, we need to express the gift of ministry.” The Archbishop also proposed the I.A.O. collaborate with the Archdiocese of Athens, and establish a program of hosting young children in Greece.

The Speaker of the Hellenic Parliament warmly welcomed the President of the I.A.O. General Assembly and expressed his respect over the role of the I.A.O “which strives and contributes towards highlighting the Orthodox faith and interreligious conciliation.” Additionally, he noted that “together with the I.A.O Secretary General, we have discussed further ideas and proposals for strengthening this truly successful institution and this fruitful cooperation”, while he assured that “the Hellenic Parliament will make every effort to take further steps towards honouring the Orthodox faith but also towards the interreligious conciliation, necessary in the modern world and towards the resolution of problems”.

Athens, 24-25 May 2021. Official meetings between the IAO leadership and the political, state and religious leadership of Greece.