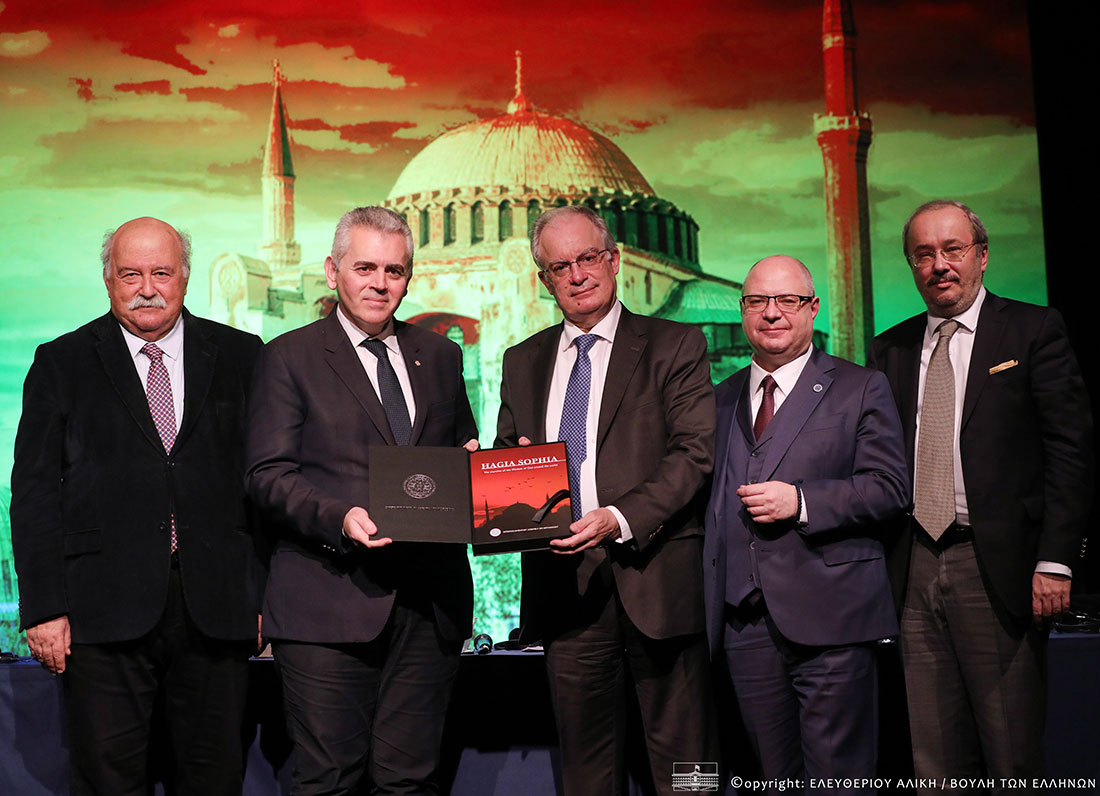 The first official presentation of the Volume “Hagia Sophia. The Churches of the Wisdom of Gods around the world” -fruit of collaboration of the Interparliamentary Assembly on Orthodoxy (I.A.O.) and the Center of Excellence “Utilization of Orthodox Heritage and Interreligious Dialogue”- took place at the premises of the Cultural Center “Hellenic Cosmos” in Athens. At the festive event, moderated by the President of the Greek Journalists’ Union (ESIEA), Mrs. Maria Antoniadou, the President of the I.A.O. General Assembly Mr. Sergei Gavrilov, addressed the participants, emphasizing “In Byzantium and in Russia, the teachings on the Wisdom of God were particularly widespread… Unfortunately, the magnificent Cathedral of Hagia Sophia in Istanbul, the most important common Christian symbol and cultural monument of world significance, became a mosque in 2020. The change of status of Hagia Sophia obviously affects all Orthodox Christians and all kinds of relations in our continent. For almost 30 years, our Assembly has been deliberately trying to shape a model of international relations based on mutual respect for both our common spiritual values and our cherished national traditions”. 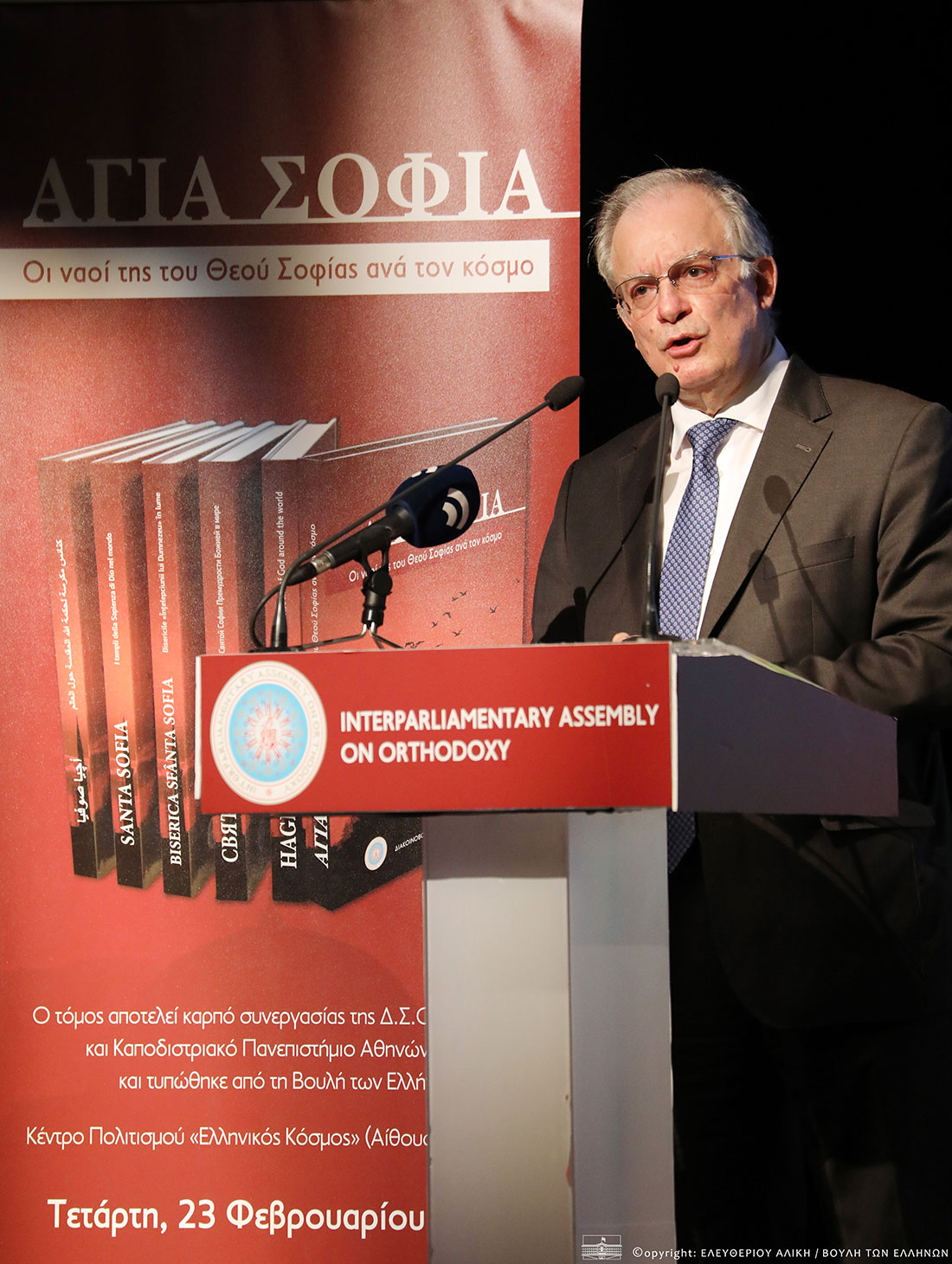 The President of the Hellenic Parliament, Mr. Konstantinos Tassoulas, spoke about the Volume and the importance of its mission. He also praised the I.A.O. initiative and emphasized: “Hagia Sophia has exceeded in duration the Byzantine Empire and it is today an invaluable symbol of Ecumenical Orthodox Christianity. As such, the decision of the Interparliamentary Assembly on Orthodoxy to highlight Hagia Sophia and 36 other churches around the world from Scotland to China as one of the answers to the brutality of its conversion into a mosque.” 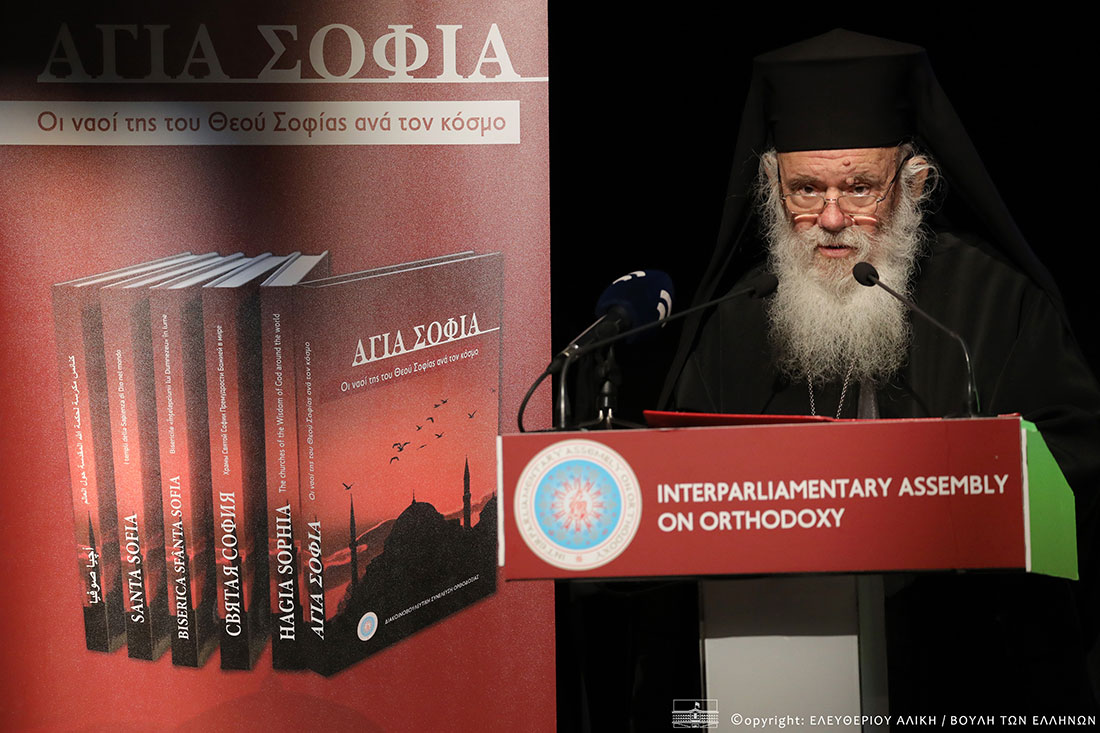 His Beatitude Ieronymos, Archbishop of Athens and all Greece, in his greeting address mentioned: “It is certain that the title of the volume urges everyone to think about Hagia Sophia of Constantinople, the Great Church. Its conversion to a mosque in 2020 certainly shocked all the Orthodox souls around the world. The publication of this Volume lays largely on this concern and we all unite our protest at this point”. In addition, he pointed out “a sense of responsibility is also created. We must do something, not only on the subject of the Hagia Sophia in Constantinople (Istanbul), but more generally as Orthodox on our monuments, the places of worship that have hosted for centuries tears and laments and thoughts, housed all this unfolding of human dialog under the blessing of the Creator of the Word and the Wisdom of God”. In her address, the Deputy Minister of Education and religious Affairs Mrs. Zetta Makri, congratulated the Ι.Α.Ο. leadership for the project noting: “In response to a decision of religious complacency and intolerance that blatantly affects the Christian world and devalues a monument that is a Common Heritage of Mankind, the I.A.O. presents this volume, where, through a unifying and ecumenical view, without a trace of religious fanaticism, the Orthodox World confirms and testifies its existence”. The Rector of the National and Kapodistrian University of Athens (NKUA), Mr. Athanasios Dimopoulos stated that: “The purpose of this publication is none other than to defend the historical truth and the high universal values that are being tested by the arguable and unhistorical decision of the Turkish leadership. Our University with its long history in the protection of cultural heritage and having established the Center of Excellence “Utilization of Orthodox Heritage and Inter-religious Dialogue” appeals to all relevant bodies, the competent for the safeguard of cultural monuments International Organizations to undertake all the necessary initiatives for the preservation the character of the Hagia Sophia monument”. In addition, the scientific responsible for the publication, professor of EKPA, Ms. Ioanna Stoufi-Poulimenou in her speech gave a brilliant description of the rich content of the Volume, as well as the methodology followed for this publication. 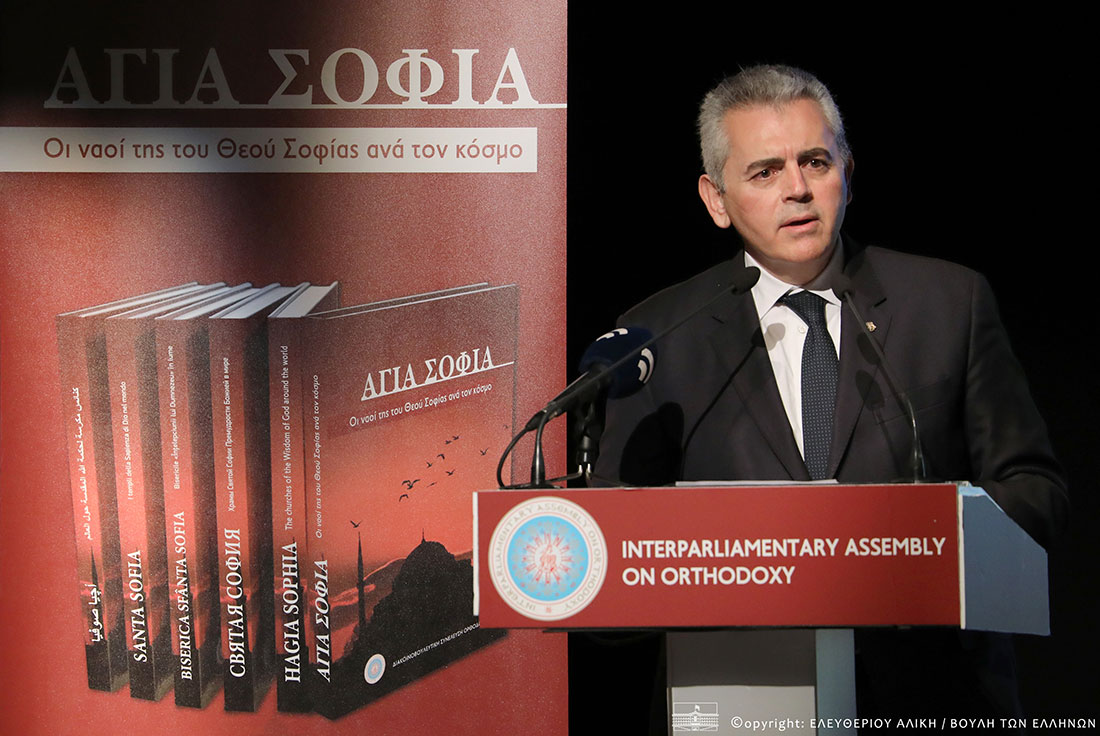 The I.A.O. Secretary General, Dr. Maximos Charakopoulos in his keynote speech emphasized, among other things, that: “The Volume “Hagia Sophia: The Churches of God’s Wisdom around the world”, is a kind of “fund of wisdom” which includes 37 Temples, dedicated to the Holy Wisdom of God. Symbolic temples, spread over a huge spectrum, with one end in the British Isles and the Atlantic Ocean and the other in faraway China. With the center, of course, of this imaginary axis – which also reflects the range of influence of Byzantine culture – the most famous, the most glorious Hagia Sophia Church – the Hagia Sophia of the City. A state symbol of the Eastern Roman Empire, a timeless beacon of Ecumenical Orthodoxy”. He also added that: “The conversion of Hagia Sophia into a mosque was obviously a premeditated act, as it was preceded by the conversion into Hagia Sophia of Trabzon, Hagia Sophia of Nicaea in Bithynia and Hagia Sophia of Adrianople. Step by step to absorb the international reactions, to get used to the violation of the historical truth, in a context of genocide of memory, to finally reach the final goal, the Hagia Sophia of Constantinople”. The head of the international institution stressed that: “From the very beginning, the I.A.O. called on the international community to take an official intervention and condemn the Turkish practice, urging a return, at least, to the previous regime, which would allow its effective protection. This volume is also part of this information campaign of the world public opinion. In order not to let forgetfulness allow injustice and illegality. Our goal is difficult. But no battle is lost unless given first. We, in the I.A.O., as an institution recognized in the 29 years of its existence, representing parliaments from dozens of countries, with its increasing international prestige, are determined, with the help of God, to give this battle with optimism”. 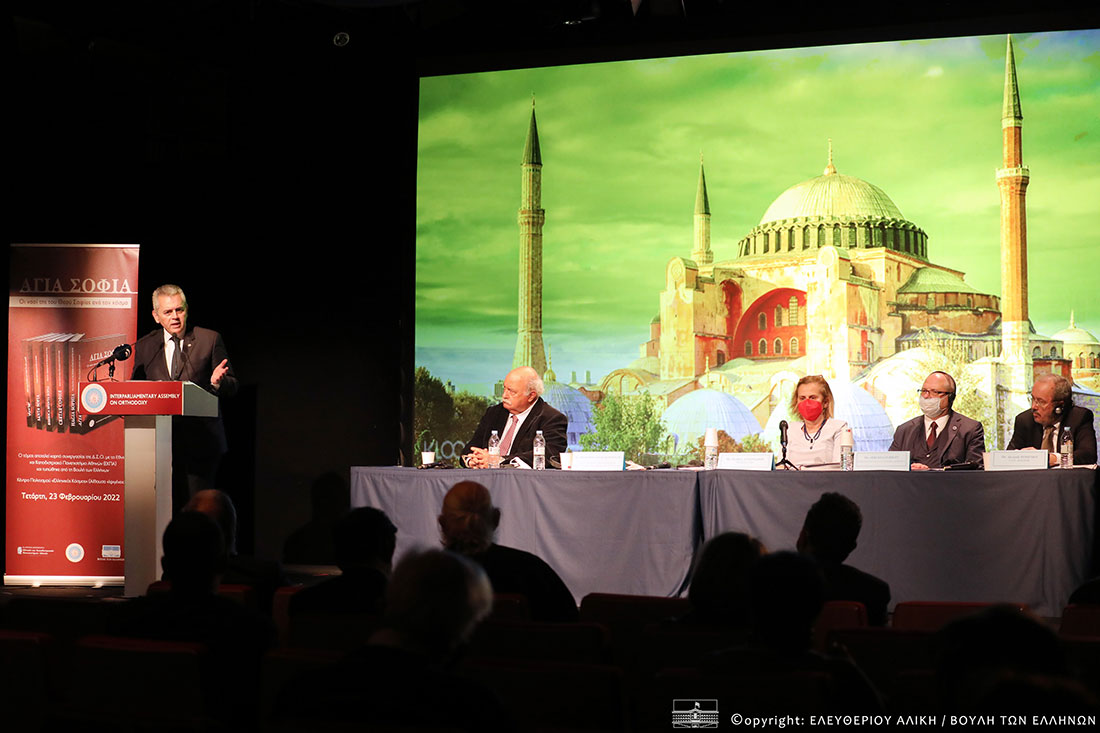 Athens 23 February 2022. Presentation of the Volume “Hagia Sophia. The Churches of the Wisdom of God around the world”