During the meeting of the I.A.O. International Secretariat and Committee Chairpersons, held in Athens, 15 December 2009 the following activities were decided:

Α._ Meeting of the I.A.O. Committee on Human Rights as well as a conference with subject: “The concept of “the alien” in the Orthodox tradition”. The conference will be held at the amphitheater of Nikaia Literary Society in Athens, Monday 15 (opening of the works in the afternoon) – Tuesday 16 (all day) March 2010. Further to the Committee members, distinguished personalities from the fields of religion and politics fields will be invited to participate as rapporteus.

Β._ On the occasion of the visit to Johannesburg (7 – 11 April 2010) associated with the presence of His Beatitude Theodoros II Patriarch of Alexandria, as well as the realization of a one-day conference, we will pursue to have a meeting with the Pan-African Parliament. The one-day conference will be held in cooperation with the seat of Modern Greek and Latin Studies of the Philosophical Faculty of the University of Johannesburg, with suggested subject: “The collaboration of the monotheistic religions facing the modern problems of Africa”.
C._ Meeting of the I.A.O. Committee on Social Activity as well as a one-day conference with suggested subject: “Volunteerism as an expression of social solidarity based on the Orthodox tradition”. The meeting, as well as, the one-day conference have been proposed to be held in Warsaw, 21 – 22 April 2010, currently awaiting confirmation from the Parliament of Poland. 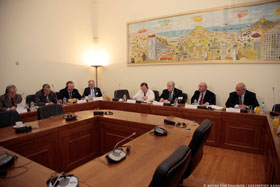 D._ Meeting of the I.A.O. International Secretariat and Committee Chairpersons as well as a meeting of the I.A.O. Committee on Culture along with a one-day conference with suggested subject: “Religious minorities as an element of cultural pluralism during the era of globalization and technological achievements”. The proposed venue and date isDamascus, Thursday 13 – Saturday 15 May 2010, currently awaiting confirmation by the People’s Assembly of Syria.

Ε._ 17th I.A.O. General Assembly. Documented proposals on the venue will be presented to the Secretariat by January 15, 2010 and a special one day meeting of the International Secretariat will be held in February, in order to reach the final decision. The main subject of the General Assembly will be: «The contribution of Orthodoxy in the dynamics’ and development of statehood of the Orthodox countries’».

F._ Contacts with the Parliaments of Czech Republic, Slovakia, Georgia, Moldova and Finland by end of January 2010 and determination of visit dates with the purpose of appointing delegations and participation to the I.A.O.

G._ Contact with the Latin America (Argentina, Brazil, Mexico, Chile) Bishops of the Patriarchate of Antioch by the end of January 2010 in order to locate Orthodox Members of Parliaments and determination of dates for a possible I.A.O. delegation visit.