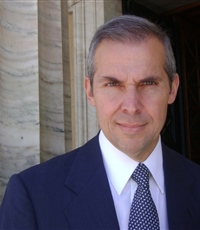 Place and Date οf Birth: Athanasios Davakis was born in Athens in 1962, 18th March. He originates from Mani (Kehrianika).
Marital Status: Athanasios Davakis is married with one daughter.
Profession: Solicitor.
Studies: He studied Law at the Democritian University of Thrace and holds a degree in Byzantine and Modern Greek Studies from the School of Philosophy of the National and Kapodistrian University of Athens. He is a solicitor and a member of the Athens bar. He was awarded a research grant from the National Research Institute of Athens (Department of Modern Greek Research, Sector: “Constitutions and Ideology in 15th- 19th century Society”).
Foreign Languages: English, French.

He became a member of the Greek Parliament in the consecutive elections of 1993, 1996, 2000, 2004, 2009 and 2012, representing the electoral region of Laconia. He served as a Secretary and Deputy Dean ‘Cosmitor’ at the Board of Parliamentary Presidents, as well as, he appointed a member in various Parliamentary Committees.
On 17 September 2020, during the elections of the organs of the 27th annual General Assembly of the Interparliamentary Assembly on Orthodoxy (I.A.O.) he was appointed Head of the Coordinating Cooperation Committee of the Interparliamentary Assembly on Orthodoxy (I.A.O.) with the Pan-African Parliament and Member of the I.A.O. Cooperation Working Group with the International Catholic Legislators Network (ICLN).

• During his Undergraduate Studies, he was responsible of the ideological planning of DAP-NDFK at Democritian University of Thrace Between (1980-1984).
• Political executive of New Democracy Party for the Laconia prefecture (1988).
• Member of the Central Committee of New Democracy Party, since February 1977 until today.
• He acted as a chair of Boards in the Greek Organization “O.G.E.E.K.A. Dimitra” (Greek Ministry for Food and Rural Development from March 2008 till September 2009.
• Shadow Minister for Civilization Affairs of the New Democracy Party since 2009.
• He served as a Reserve Officer (Pilot Officer of Judicial in Martial Aviation, 1984-86).
Member of various Cultural and Scientific Associations of Laconia, as the Literally Group of ‘’Parnassos’’, ‘’Society for Laconian Studies’’, ‘’The Society of Peloponnesian Studies’’, the club of: ‘’The Friends of Spartan Archaeological Museum”, “The Intellectual Hearth of Sparta”.