The Secretary General of the Interparliamentary Assembly on Orthodoxy (I.A.O.) Mr. Andreas Michailidis, MP and the I.A.O. Advisor Dr. Kostas Mygdalis participated to the 4th Greek-Russian Social Forum, held in Athens 2 November 2016, organized on the occasion of the festive cultural year 2016 being the Year of Greece in Russia and the Year of Russia in Greece.

The two Ministers of Foreign Affairs of Greece and Russia Mr. N. Kotzias and Mr. S. Lavrov honoured the event with their presence.

Mr. Michailidis in his greeting speech informed about the I.A.O. past activities, and stressed on finding potential ways in solving problems every citizen is facing with. He said inter-alia: “The IAO feels the need to reassure any concerned citizen of the world, that politically is on the side of every man who feels worried and powerless on the global situation, every refugee, every unemployed every well-informed citizen, every woman who is persecuted or suffering mentally and physically. Every free man who seeks for a just and merit-based life, every unemployed young man who fights for his future. The IAO in response to the crisis we are experiencing, calls the peoples to safeguard and highlight their historical memory against phenomena of revival of fascism, racism, phenomena of human discrimination, phenomena of all forms of violence and more precisely religious violence…. “.

Mr. Mygdalis in his speech on the subject: “The Christian Orthodox tradition as understanding and reconciliation factor in Eastern world,” said the following: “… Christianity on the eastern side of the world in relation to central Europe, which is Orthodoxy, certainly can and indeed must live and breathe with the certainty that righteously follows the word of the living God forever and ever. … Political Theology exists in an interpretative prospect that has as its starting point the political human dimension. Politics is not an additional dimension of reality in total, but is reality itself. Such a theological interpretation emphasizes the political dimension of human life, distinguishes its determining factors and searches for opportunities to change the existing political reality … “.

The I.A.O. had the opportunity to present its publications during the works of the Forum and the public responded with great interest. 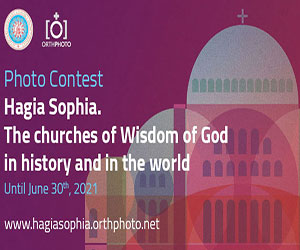