Conference of the Interparliamentary Assembly on Orthodoxy (I.A.O.) with subject: “Christian Communities in the Middle East: Presence, Rights, Fears & Hopes”. 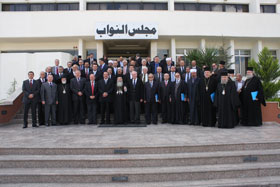 The Interparliamentary Assembly on Orthodoxy (I.A.O.) realized a conference in Amman on Tuesday, 15 November 2011 with subject: “Christian Communities in the Middle East: Presence, Rights, Fears & Hopes”. The conference was held at the House of Representatives of Jordan. I.A.O. members, Orthodox in faith Members of Parliaments from Arab countries, as well as personalities distinguished personalities from the fields of religion, politics, as well as thinkers in the field of Christianity participated at conference. 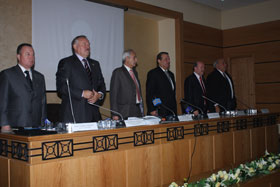 Greeting messages were read by the I.A.O. Secretary General, Member of the Hellenic Parliament Mr. Michail Pantoulas, His All Holiness, Beatitude Patriarch of Jerusalem and All Palestine Theophilos III, the representative of His Holiness ARAM I Armenian Apostolic Church (Cilicia), His Grace Archbishop Gomidas Ohanian, Mr. Reda Haddad, Member of the House of Representatives of Jordan and Member of the I.A.O. Committee on Education. Due to parliamentary elections in Russia, the President of the I.A.O. General Assembly, Member of the Russian State Duma Mr. Sergei Popov was not able to participate to the works of the conference. His greeting message was read by the Chairman of the I.A.O. Committee on International Policy, Member of the Russian State Duma Mr. Konstantin Zatulin.
The opening of the works of the conference was declared by the Speaker of Jordan’s House of Representatives Mr. Abdul Karim Doghmi.
A ceremony in honour of Mr. Ghassan Tuéni was held in the framework of the aforementioned conference. Mr. Tuéni is a prominent diplomatic and political personality from Lebanon, with a considerable inter-orthodox activity, defender of Arabic-speaking Christians’ Orthodox tradition and distinguished fighter for human rights and religious freedom in the Middle East. A commemorative award of distinction was offered to him by the I.A.O. Secretary General Mr. Michail Pantoulas.
A number of reports were presented by: Dr. Audeh Quawas, Member of the Member of the Central Committee of the World Council of Churches (WCC), Mr. Grιgorios Ziakas, Professor Emeritus of the Theological School of the Aristotle University of Thessaloniki, Very Reverend Nabil Haddad, Founder and CEO of the Jordanian Interfaith Coexistence Research Center, Secretary General of Arab Group Against Immigration of Arab Christians and Mr. Daoud Kuttab, Director General of the Community Media Network (CMN). Moreover, reports on the main subject of the conference were presented by: Prof. Mr. Valery Alexeev, Advisor to the I.A.O. International Secretariat, Senator Mr. Aqel Biltaji, Chairman of the Tourism and Heritage Committee and Mr. Ahmad Enab, former member of the Parliament of Jordan.
Following reports on the subject of the conference, a presentation – analysis of the European Parliament’s resolution of 20 January 2011 on the situation of Christians in the context of freedom of religion was made by Mr. Anastasios Mitsopoulos, Member of the House of Representatives of the Republic of Cyprus.

Interventions on the reports presented followed by participants. The Christians’ hardship in a lot of Middle East’s countries, as well as other countries of the world such as China, North Korea, Pakistan, Iraq, and occupied Cyprus was highlighted. In the greeting addresses, as well as reports and interventions presented; the need for inter-orthodox cooperation in support of Christians’ constant residence at their place of origin, as elements of progress and stability in their own countries was underlined as well.
The Ambassador of Greece in Jordan Mr. Iraklis Asteriadis, Mr. Alexander Kalugin, Ambassador Extraordinary and Plenipotentiary of the Russian Federation in Jordan and Mr. Serhiy Pasko, Ambassador Extraordinary and Plenipotentiary of Ukraine in Jordan attended the works of the conference.