Delegation of the Interparliamentary Assembly on Orthodoxy participates at the Sixth Ordinary Session of the Pan-African Parliament.

Following an official invitation of the President of the Pan-African Parliament (PAP) Dr. Idriss Moussa Ndele, a delegation of the Interparliamentary Assembly on Orthodoxy (I.A.O.) headed be the I.A.O. Secretary General Mr. Michail Pantoulas, MP, and with the participation of Mrs. Katerina Samoilyk, MP, Member of the I.A.O. International Secretariat and the I.A.O. Advisors Dr. Kostas Mygdalis and prof. Valery Alexeev attended the works of PAP’s Sixth Ordinary Session in Addis Ababa, 16 – 19 January 2012. The works of the Session were held at the UNECA Center in Addis Ababa.

The I.A.O. Secretary General Mr. Michail Pantoulas addressed the Session during the Inaugural Ceremony (16.01.2012) and had a meaningful meeting with Mr. Marwick T. Khumalo, Member of the Pan-African Parliament, Chairman of the Permanent Committee on Cooperation, International Relations and Conflict Resolution. In view of the upcoming joint meeting of the two Coordinating Cooperation Committees from PAP and I.A.O., they had the opportunity to overview the relationship between the two organisations.  Moreover, the I.A.O. delegation had a meeting with the Speaker of the House of Peoples’ Representatives Federal Democratic Republic of Ethiopia Mr. Abadula Gemeda, during which, Mr. Pantoulas briefed the Speaker about the I.A.O. activities and goals and discussed with him the possibility of Ethiopian Parliament’s participation to the I.A.O. by appointment of an official Parliamentary delegation to the I.A.O. The Speaker’s primary response was positive to this proposal. 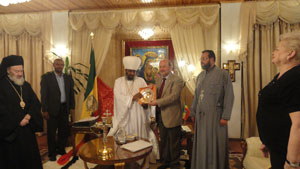 In addition, the I.A.O. delegation had meetings with the Ambassadors of Greece, Russia and Ukraine in Addis Ababa, Metropolitan Petros of Axum and the Patriarch and Catholicos of Ethiopia Abune Paulos.