Main Subject: “The contribution of Orthodoxy in the enlarged European Union.”

The 2001 Annual Assembly of the Interparliamentary Assembly on Orthodoxy took place in the sacred island of the Apocalypse of St. John the Theologist, with the presence of the President of the Hellenic Parliament, Mr. Apostolos Kaklamanis and the Commissioner of the European Commissions Mrs. Anna Diamantopoulou. The central theme of the Assembly was”. The contribution of Orthodoxy in the enlarged European Union. 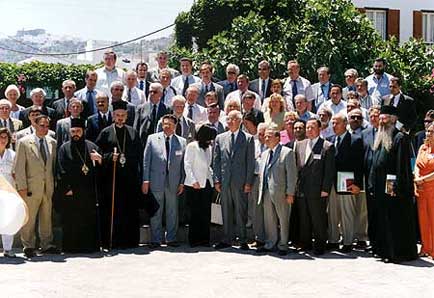 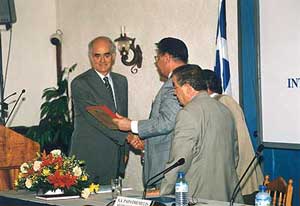 The Assembly was presided by its elected President, Mr. Victor Zorkaltsev, member of the Russian Duma. The President of the Hellenic Parliament Mr. Apostolos Kaklamanis, officially opened the works of the Assembly, and addressing the participants he stressed , inter alia, the following:

“…The organisation of the Annual Assembly this year in Patmos, illustrates in a symbolic way the message we strive to communicate worldwide. The message of the revealing truth that love, acceptance and respect for others, beyond race or nation, political, religious or other beliefs, comprise the only way for humanizing the world. Europe’s contemporary reality is defined by a variety of political, social and spiritual processes. The tendency for awakening or even various nationalist bursts is ascertained, for the instigation of which is used even the confessional fragmentation of european peoples in order to weaken the vision of the peaceful and equal coexistence in the “common european home”. That situation arises past historical memories of confessional rivalries and threatens the joint effort for unity, not only of the Christian, but of all peoples, especially those of the Balkans, of Central and Eastern Europe and their peaceful coexistence in a multicultural whole… It is unfortunately tragic to ascertain that in our neighboring countries, wishing to become members of the European Union and sharing the pan-european vision, as defined above, human rights are overtly violated and every sense of respect for man is infringed. At the same time, in another country of our region, Cyprus, we witness the continuing Turkish military occupation that brings about the great problems of the missing persons, the refugees, but also of the destruction of byzantine christian monuments of the island, which constitute the heritage of the whole humanity. What is condemned with horror by humanity today, as done by the fanatic Taleban in Afghanistan, has been happening for twenty five years in a European country, Cyprus.. The orthodox belief, dear colleagues, ladies and gentlemen, communicates to Europe and the whole world a model of man and a model of life: that all men are in our essence, that is by nature, equal. It remains to us to realise the deeper, pan- human hope: to achieve a global society, where we shall all be equal, not onaly by nature, but also by position, inside our differentiation…”

The member of the European Commission, Commissioner Mrs. Anna Diamantopoulou, addressing herself to the Assembly, pointed out the following :
“…The European Union has kept steady relations with religious dogmas, especially with the christian dogmas, given that its basic principles and declarations are the principles of Christianity, that is the values of peace, solidarity and respect for human and individual rights, the respect for Man and the individual, which are the foundations of the European structure. The European Commission wishes to develop these relations and that would become easier if dogmas are organised at a european level, if they have an integrated and effective structure. Moreover, the public opinion perceives the European Union as a space of christian tradition… The enlargement of Europe, the new perspective of the twelve new member- states will really strengthen the cohesion of Orthodoxy… The enlarged Europe will border with the countries of the ex Soviet Union. This means that Orthodoxy may play a new privileged role in the dialogue with Ukraine and Russia, and, therefore, in the stability of the continent, but also in the transition of these countries to democracy and market economy.
Which is the European plan on Orthodoxy? In this new Europe of twenty seven countries, for an orthodox christian, I could easily say that Europe may refer to the though of St John the Chrysostom, who showed that the “mystery of the Brother” is the necessary continuity of the “mystery of the sacrifice…”

Respectively, the Head of the International Secretariat, Secretary-General of the organisation, mr.S.Papathemelis stressed in his opening speech:
“…The nation-state is the target of the current form of globalization. It is an invisible tool that is not usually studied, seen or pointed out, not discussed, the newly found heresies, the sects.
Commissioner Mrs. Anna Diamantopoulou, addressing herself to the Assembly

I will communicate to you the basic data of a sensational article of the Monde Diplomatique, published last month, May, titled “The Sects, Trojan Horse of the USA in Europe”. Once, says the author, countries could, ten years ago, face the newly found heresies, as a distressing social phenomenon. Now they have to deal with it. He calls his own country, France, to consider it as a problem of national security. I ought to mention that he reveals “bureaus”. Official US bureaus, the bureau for Global Religious Freedom, that is a State Department service. He points out that there is at least one agent in each American Embassy throughout the world representing that bureau and working for it. He informs us that there are two similar bureaus in Washington, one of the Congress and Senate and one of the White House, specifically of the National Security Council. The latter monitors the function of the former two bureaus in the world. 90% of the sects are seated, or come from and are controlled by Washington? We, as carriers of an Orthodox anthropology and explanation of its history and processes, carriers of a concept on the world and society, enlightened by the light of the holy Apocalypse on earth, which we have the honorary privilege to be on, are certainly interested in a united Europe, certainly feel, as said by the President of the Hellenic Parliament, residents of a Europe extending form the Atlantic Ocean to the Urals. Of course we sense it as a Europe of peoples, of nations and citizens as a multi-nation and multi-cultural Europe that shall not use a leveler to make us all the same. We, the Orthodox of the European continent are its other half. We have no illusions that we formulate today the future of Europe. That may happen with the final enlargement of Europe and certainly by the recognition of Orthodoxy as a co-creator of ethic factors and human and social life.We, in the Interparliamentary Assembly on Orthodoxy, think that the social and anthropological ideal of Orthodoxy is post-capitalist, post- communist and post- socialist. I could add that it is post- modern and post- innovative. That ideal has touched the human soul in its long course. The great Fathers of the Orthodox Church, I mean the united indivisible Church, be they Eastern or Western Fathers, have achieved to perceive that anthropological ideal, to speak of Man as an image of God, a value worth fighting for, and it is only when men are an image of God, that they are His children, beyond discriminations of race or color, beyond any discriminations whatsoever, they are the children of the same Heavenly Father. We certainly carry inside ourselves, and I think that all peoples do the same thing both in the West and the East, the historical heritage…”

Finally, the President of the General Assembly of the Interparliamentary Assembly on Orthodoxy, Russian member of Parliament, mr. Victor Zorkaltsev stressed, among other things:

the President of the General Assembly MP mr. Victor Zorkaltsev and Secretary General MP mr. Stylianos – Agelos Papathemelis.
“…We can, therefore, draw certain conclusions regarding our tasks. The European Interparliamentary Assembly on Orthodoxy is dynamically moving towards the direction of creating a great, broad movement. Second point: from an initially political organisation which then aimed at an exchange of experiences and information on the problems of the Orthodox peoples of Europe, we are gradually converting to a research I could say and theoretical center, where proposals are elaborated, on the management of a series of problems in various countries. Third point: We see that the leaders of orthodox churches are beginning to embrace with trust the European Interparliamentary Assembly on Orthodoxy and we see that the dialogue and the cooperation with the regional Orthodox churches is promoted and extended. The Annual Assemblies should be supplemented by activities in which the intelligentsia and various representatives of the political world shall be invited, so that in the form of seminars to thoroughly examine a series of other issues and to expand the work of the EIAO. That very seven-year work, leads us to the conclusion that we should strengthen our publication efforts, in order to communicate to the public opinion of our countries the decisions and views of our movement. Fifth point: The political circumstances in the worlds have changed and that change essentially affects our work also. We should form the necessary conditions in order to extend our relations with many international organisations and movements. And the last point: We can certainly expect an extension of the influence and the prestige of the EIAO in the world. We can surely accelerate that extension in order for it to become and objective fact which will fulfill the desire of the orthodox people in the world to unite and cooperate…”

The Ecumenical Patriarch was represented by the Bishop Rigiou mr. Emmanuel, whereas the Reverend Father of the historical monastery of St.John attended the Conference.The Ecumenical Patriarch mr.Vartholomeos, in his message delivered to the Conference, stressed the following: “… The Orthodox Christian view of the world can constitute, according to the evangelist word “the salt of earth” and the “light of the world” ( Mathew .5, 13-14), for the glory of God and the salvation of the peoples of Europe and the whole World…”
the Bishop Rigiou mr. Emmanuel adressing the Assembly General on the name of Ecumenical Patriarch.

Delegations from twenty European and non- European Parliaments participated in the Assembly.

Two advisors of IAO and mrs. Miliou
It is worth noting that it is the first time, following the decision on converting the Interparliamenrary Assembly on Orthodoxy to a global organisation, that parliamentary delegations form the Parliaments of Holland, Sweden and Australia participated in the Conference.In the framework of the Assembly, the participants attended the Holy Service at the historical Cave of the Apocalypse of St.John.

The Assembly completed its works by electing its new organs.

Minutes of the 8th General Assembly