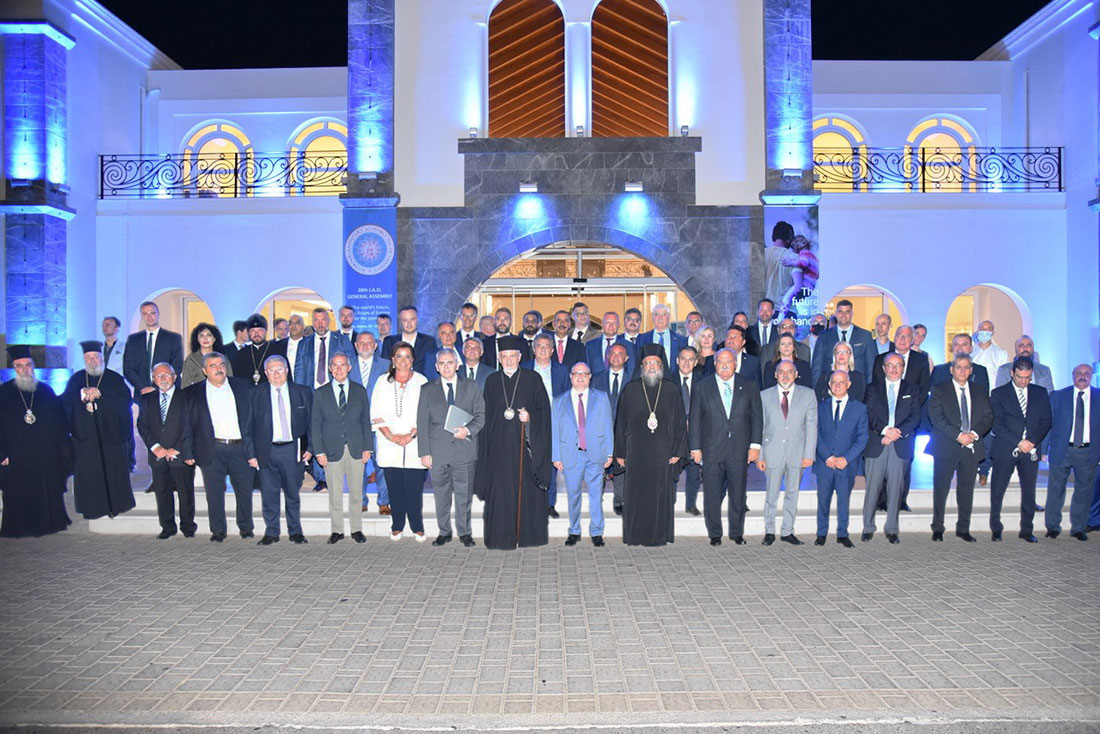 Main Topic: “The World’s Future, the Future of Europe after the pandemic”.

The 28th General Assembly of the Interparliamentary Assembly on Orthodoxy (I.A.O.) was held with great success, in Georgioupolis, Apokoronas, Chania on July 22-25, 2021, with the participation of dozens of MPs from 17 countries, as well as representatives of international organizations and Churches, On the eve of the works, on July 21, the I.A.O. Secretary General Dr. Maximos Charakopoulos and the I.A.O. Advisor Dr. Kostas Mygdalis held meetings with the local political and religious authorities of Chania, while they gave a press conference at the headquarters of the Sub-Regional administration of Crete in Chania. Specifically, a meeting was held with the Regional Governor of Crete Mr. Stavros Arnaoutakis and the Deputy Regional Governor of Chania Mr. Nikos Kalogeris, during which the I.A.O. Secretary General received warm compliments for the choice of the city of Chania for holding, with physical presence, the annual General Assembly of the International Organisation, a fact that constitutes “a de facto vote of confidence to Greece and Crete”. On the same day, the head of the I.A.O. had the pleasure and honor to realise a meeting with His Eminence Metropolitan Amfilochios of Kissamos and Selinos, Chairman of the Board of the Orthodox Academy of Crete (OAC), as well as with the General Director of the OAC Dr. Konstantinos Zorbas. Earlier, the I.A.O. Secretary General attended the Hierarchical Divine Liturgy at the Holy Church of Prophet Ilias in Kathiana, Chania, in presence of H.E. Metropolitan Damaskinos of Kydonia and Apokoronas, while the Preceptor of the Holy Patriarchal and Stavropegian Monastery of Holy Trinity of Tsagkalolon, Bishop Damaskinos of Doryleon, warmly welcomed him. 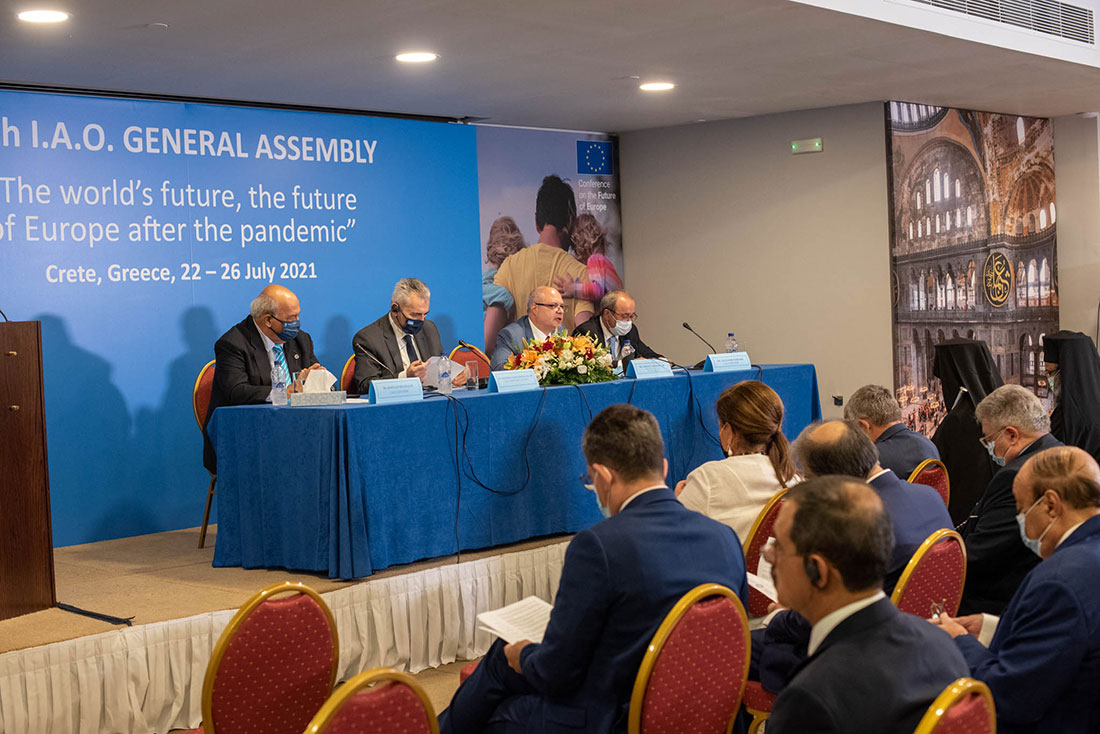 Before the Opening of the I.A.O. General Assembly, a meeting of the Cooperation Working Group of the I.A.O. and the International Catholic Legislators Network (ICLN) was convened. On behalf of the I.A.O, the I.A.O. Secretary General, the President of the I.A.O. General Assembly Mr. Sergei Gavrilov, the members of the Cooperation Working Group Mr. Athanasios Davakis and Mr. Alexey Chepa, as well as the two I.A.O. Advisors Dr. Kostas Mygdalis and Mr. Alexander Fomenko participated. On behalf of the ICLN the President of the ICLN Dr. Christiaan Alting von Geusau, the Vice-President Emmanuel Baghdi and the MEP Lucas Mandl, participated at the meeting. The liaison between the I.A.O. and the ICLN Mr. Virgilio Avato also participated in the meeting. The discussion revolved around issues concerning the common values and joint reflection points of the two main religions of Christianity, such as the need to promote the Christian identity of the European continent, the future of a geographically and politically united Europe without the exclusion of European peoples, persecutions of Christian populations in many parts of the world, such as the Middle East and Africa, and the enhancement of timeless Christian monuments of the united Christianity, such as the Holy Monastery of Santa Maria in Grottaferrata. The two Organizations agreed to remain observant on all-important issues discussed and assured to continue the dialogue between them, which will lead to joint initiatives and actions. 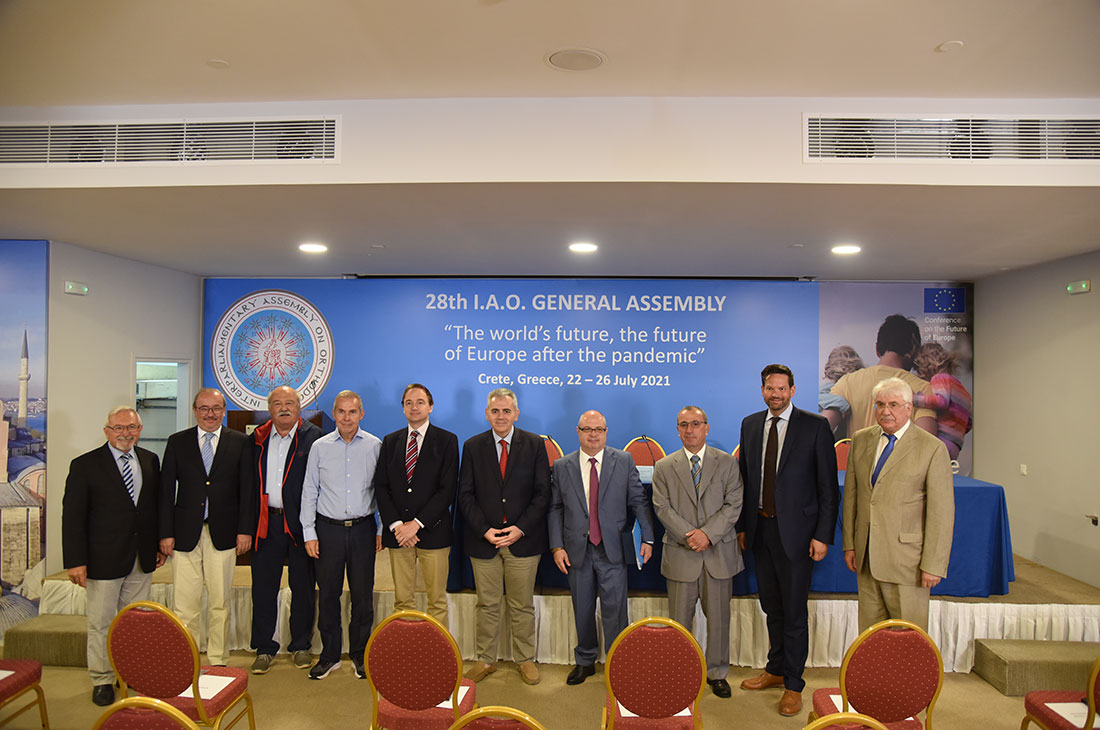 During the inaugural ceremony of the 28th I.A.O. General Assembly on the topic: “The Future of the World, the future of Europe after the pandemic” dozens of parliamentary representatives from various countries, as well as representatives of the Ecumenical Patriarchate, Orthodox Patriarchates and International Organizations attended. The opening of the works was presented by the Vice President of the Hellenic Parliament Mr. Odysseas Konstantinopoulos, conveying a message from the President of the Hellenic Parliament Mr. Konstantinos Tassoulas. Greeting messages of the Ecumenical Patriarch Bartholomew, read by His Eminence Metropolitan Elder Emmanuel of Chalceldon. Also, by the President of the Hellenic Republic Ms Aikaterini Sakellaropoulou, the Patriarch of Antioch John X and the Patriarch of Moscow Kyrill, while interventions were made by, among others, the Minister of Justice, Mr. Konstantinos Tsiaras, the Vice President of the Parliamentary Assembly of the Council of Europe Mr. Dora Bakoyannis, the European Commissioner Mr. Margaritis Schinas, the Vice President of the European Parliament Mr. Dimitris Papadimoulis and the Vice President of the European People’s Party of the European Parliament Mr. Vangelis Meimarakis. The opening ceremony ended with the keynote speech of the I.A.O. Secretary General Dr. Maximos Charakopoulos. On July 23rd, the works of the 28th I.A.O. General Assembly continued, where greeting messages of many international organizations were read, such as the Inter-Parliamentary Union (IPU), the Parliamentary Assembly of the Mediterranean (PAM), the Parliamentary Union of the Organization of Islamic Cooperation member states (PUIC), the Parliamentary Assembly of the Black Sea Economic Cooperation (PABSEC), the International Catholic Legislators Network (ICLN), the Muslim World League (MWL), the Organization “Religions for Peace”, the Movement for Politics (MppU). Also, in the plenary session, the Chief of the Hellenic Police, Lieutenant General Michael Karamalakis, spoke on the central issue and especially on the challenge the police was faced with in order to implement the measures to deal with the pandemic. A greeting message from the Speaker of the House of Representatives of the Republic of Cyprus, Ms. Annita Dimitriou, was also read. On the third day of the works, after the completion of the positions of the participants, the head of the I.A.O. proceeded to the overview report of the previous activities and then presented the programming report of the Organization with a series of activities for the next period, which was approved by the participants. On the sidelines of the I.A.O. General Assembly, the I.A.O. leadership held a series of highly constructive bilateral meeting with representatives of international organizations and national parliamentary delegations. Besides the delegation of the International Catholic Legislators Network (ICLN) headed by the ICLN President Mr. Christiaan Alting von Geusau and the Assistant Secretary General of the Parliamentary Union of the Organization of Islamic Cooperation member states (PUIC) Mr. Ali Asghar Mohammadi Sijani, the I.A.O. Secretary General and the President of the I.A.O. General Assembly met with representatives of the Muslim World League (Mr. Mishaal Bin Abdulrahman Shalaan and Mr. Ahmed Al-Ghamdi), with the Parliamentary Assembly of the Black Sea Economic Cooperation (PABSEC) (Mr. Asaf Hajiyev and Mr. Igor Besic), with the new Romanian parliamentary delegation (Mr Ion Vulpescu, Mr Ioan-Gabriel Avramescu, Mr Ilie-Alin Colesa and Mr Fiodor Silviu) and Mr Ara Shahverdyan, the Armenian representative of the Iranian Parliament. In all these meetings, issues of common interest were discussed and the prospect of deepening the existing cooperation and more active involvement in the I.A.O. activities. The completion of the works of the annual I.A.O. General Assembly was followed by a visit to the Holy Monastery of Arkadi, Crete, where the participants were welcomed by Fr. Theologos and the Deputy Minister of Infrastructure and Transport Mr. Giannis Kefalogiannis.

Chania, July 22, 2021. Speech by the I.A.O. Secretary General Dr. Maximos Charakopoulos Member of the Hellenic Parliament with Topic: “The world’s future, the future of Europe after the pandemic”.

Videos of the 28th General Assembly of I.A.O.

Videos of the 28th General Assembly of I.A.O. (in Arabic). 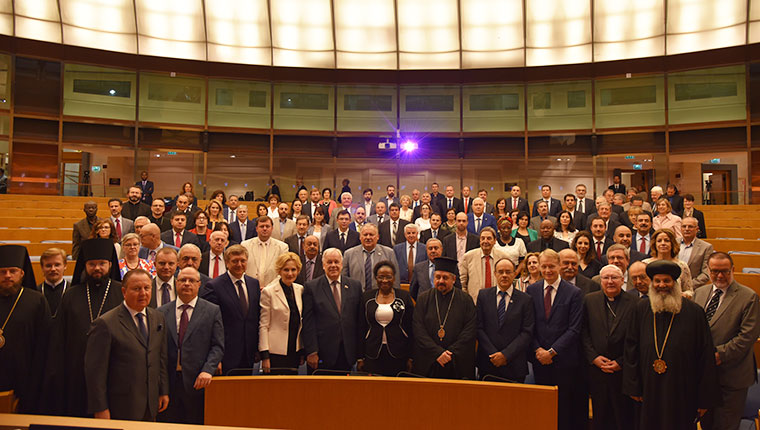